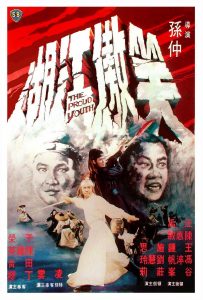 This means that The Proud Youth is about as jam-packed as can be, which is both a blessing and a curse. In terms of ’70s wuxias, it means that I loved it and I couldn’t be more pleased. In terms of traditional filmmaking and emotional engagement, though, the film really suffers. The characters are broadly painted, with strong emotions and deeds, but very few moments allow them enough room to make us feel anything about their plight. The notable exception is an early fight with Shi Zhongying (Ling Yun), who breaks his sword in half and fights with the naked blade in his bare hand, regardless of the pain or consequences. If Sun Chung had somehow managed to infuse this sort of awe-inspiring emotion into every moment, The Proud Youth would easily be one of my favorites. Alas, the focus is on the dense plotting. Splitting the material into two films would have been better; I can only imagine what the film feels like to a newcomer to this story.

The film is still a success, though, thanks in large part to its fantastic action, wonderfully choreographed by Tang Chia and Huang Pei-Chih. Jin Yong’s flights of fantasy allows for some wonderful set pieces, and Sun Chung really lets them loose to create the best wuxia action of the year, by far. The defining difference is in how they utilize wirework within the actual choreography. This is commonplace in ’80s and ’90s wuxias, but this was the first time I’ve really noticed anything like it in the course of my chronological series. It felt so exciting and ahead of its time to see the seeds of something I hold so dear. Wires are used liberally throughout the fights for your standard flying and jumping, but also to allow characters to fight while holding huge ceramic barrels, or jump off the still surface of water. It’s so fun, and this is exactly why something more old school like The Vengeful Beauty failed to completely grab me when seen within context. Sun Chung’s trademark slow motion and handheld camerawork add in a perfect dash of style, as well.

The Proud Youth succeeds where others have failed, setting the bar for all other wuxias of 1978. It’s definitely influenced by the Chor Yuen school of wuxia, but Sun Chung’s greater emphasis on action really allows the film to zing. The Proud Youth is fresh, exciting and absolutely packed with wuxia thrills. My memories of Sun Chung’s next film, The Avenging Eagle, make me believe it is even better, but we shall see.

Next up in this chronological journey through the Shaw Brothers Martial Arts catalog is Hua Shan’s Soul of the Sword! See ya then (hopefully soon)!