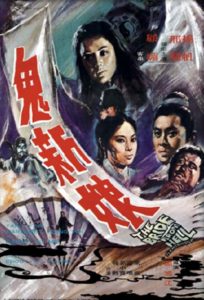 I expected ghosts and a bride from hell, but I did not expect a film so steeped in the supernatural. I’ve seen a few of these romantic ghost stories from the Shaw catalog, things like The Ghost Lovers or Night of the Devil Bride, but The Bride from Hell is in a class all its own. There’s so much more going on here… from Taoist rituals that recall Mr. Vampire and films of its ilk, to heights of fantasy akin to something from Journey to the West. At its heart, it is a simple ghost story, but the limits of its imagination are far more expansive than that suggests. To describe these moments would ruin them for future viewers, and since this one is newly and readily available (as long as you’re Region B/2 compatible), I’ll just leave it at this. It really surprised and excited me, and hopefully it does the same for you.

While the fantasy elements are great and well-integrated, the story itself seems a little sloppy. It’s lacking a true main character, as its narrative is split between Nie Yun Peng, Anu, and Da Huo Zi. This gives the film the vibe of a loiterer; there’s not a lot of drive to keep the viewer interested in the story. Other interesting stuff attempts to fill that void, but with a properly firing story, this could have been a truly incredible film. As such, it’s hard to become emotional invested in the character’s struggles. Anu’s storyline in particular should be highly affecting, but it’s handled like a secondary sub-plot instead of the main drive of the story that it really is. It’s odd, for sure, but the film succeeds in spite of this.

Flaws aside, The Bride from Hell contains a ton of fun in a very slim 79-minute runtime. Margaret Hsing Hui is wonderful as the titular bride, but if I’m honest I think Got Siu-Bo stole the show with his Oliver Hardy sort of character. As a huge Laurel and Hardy fan, I could be somewhat biased, though. 🙂 In any case, I highly recommend The Bride from Hell as a great supernatural entertainment experience.

For the final week in my annual journey into Shaw Brother horror films, I’m finally watching Kuei Chih-Hung’s Corpse Mania! See ya then!