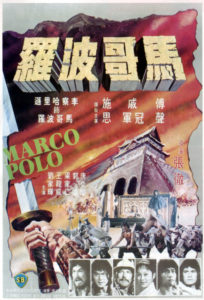 The choreography in Marco Polo was handled by Hsieh Hsing and Chan San-Yat, both newcomers to the Shaw studio with this film. They arrived ready to go, with many Taiwanese films under their belts, and their work on the film is excellent. It’s not as dynamic or exciting as the work seen in the Shaolin Cycle films, but to be honest, it’s a relatively small step downwards; Hsieh and Chan do a spectacular job of approximating the general style of Lau Kar-Leung and Tang Chia. It should also be noted that according to Chang Cheh’s memoir, Lau Kar-Leung was around for at least part of the filming, so perhaps this was a factor in the quality of the film’s action, as well. It also helps when you’re working with such an immensely talented cast of martial performers.

The training sequences are exceptionally fun and unique, as only kung fu training sequences can be. I don’t like spoiling these types of things, so I’ll just say that the bulk of Marco Polo is made up of awesome training that is sure to entertain fans of the genre. In terms of Chan Cheh’s output, though, it feels a bit too derivative of him to simply make another movie based on the basic training framework that propped up both Shaolin Martial Arts and Five Shaolin Masters. It’s a cliche that all kung fu movies are similarly structured, but this really isn’t the case with Chang’s films up to this point. Shaolin Martial Arts, Five Shaolin Masters and Marco Polo are all unique beasts, with their own strengths and weaknesses that stretch well beyond their established framework. It’s just that the specific unique quality of Marco Polo did not present itself until the days following the film, when I had time to think it over and write this review.

Since Chang Cheh is not one to simply repeat himself artistically, I knew there had to be an underlying message that he was attempting to convey. In titling the film Marco Polo, the focus is put square onto that character, but the actual film is anything but. On the surface, it is another survival story about the resilience of the Chinese people in the face of occupation and oppression. Marco Polo is happy to be in the good graces of Kublai Khan, but he is between two cultures at odds, often simply observing what is occurring around him. Through these observations, he eventually develops an understanding of the Chinese people. He is an interloper, interfering in matters where he is ignorant of the full story. His position in the tale begs the audience to ask questions like, “Why is this movie titled Marco Polo? This guy? What does he do? He mostly just glares at people and stands there!” And that is the point of Chang’s work: to show that the real stars of the story are the Chinese rebels who gave everything standing up to their Mongol usurpers.

The validity of Polo’s tale, specifically his importance in the court of Kublai Khan, is something that historians doubt and treat with skepticism. I have my own doubts, and based on this film, so did Chang Cheh. Instead of the self-assured, world-traveling merchant, Chang presents Marco Polo as a nearly silent bystander. Polo’s name resonates through history because of his own written account of his journeys, but in Chinese texts of the era he is not mentioned once. This is almost undoubtedly Chang’s point with the character, and in titling the film Marco Polo. Together with Chang’s other films of the era, Marco Polo shows its audiences how the Chinese have dealt with and overcome intense hardships throughout many different periods in time. In this particular film, there just happens to be a gweilo in the middle of things that the film is titled after. By using Marco Polo in this way, Chang effectively communicates a respect for the Chinese heroes, as well as a disdain for the European figure who is most remembered by history.

If you’re looking for a kung fu movie with great, interesting training sequences, Marco Polo is a fun one that feels more underseen than others in the genre. I had a blast watching it, and I look forward to revisiting it. I’m sure it will play much better on second viewing, with this understanding of the title firmly in place.

Next up in this chronological journey through the Shaw Brothers Martial Arts catalog is the Bruceploitation movie The New Game of Death! It’s technically not a Shaw production, but it was released by Celestial as one, so I’m doing it! Anyway, that’s up next. See ya then!