Is it even a question that the ’80s were Jackie’s best decade? It features the bulk of his directorial career, plus his amazing work with Sammo Hung and Yuen Biao. As such, narrowing this down was hard! So let’s get to it before I start to cry about the ones that didn’t quite make it. 🙁 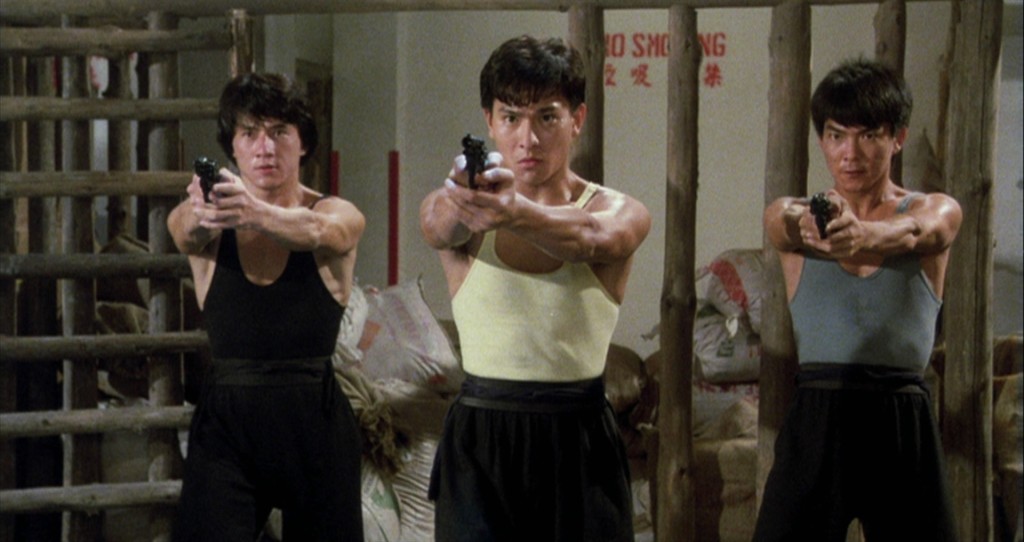 Twinkle Twinkle Lucky Stars is the weakest of the Lucky Stars for me, but it’s the only one to make this list because the action contained within it is by far the best of the series. Not only that, it’s some of the best and most iconic work in the long and illustrious directorial career of Sammo Hung. This could be clouded a bit by nostalgia because I used to watch the end of this movie over and over when I was in my teenage obsession with Jackie Chan, but whatever, Twinkle Twinkle Lucky Stars has amazing action no matter what colored glasses you look at it with.

Like Twinkle Twinkle Lucky Stars, Police Story Part II isn’t a completely satisfying movie but the action is truly incredible. The playground fight is easily one of my favorite Jackie Chan fights, and all the stuff with Benny Lai is fantastic as well. If you’re a fan, it’s a must.

Miracles is probably Jackie’s most sophisticated directorial work, bringing the intricacy and precision of his action choreography to the other, more traditional technical aspects like cinematography, editing, non-action staging and production design. It’s quite an impressive production, even without considering the action (which in this film sort of acts like a cherry on top). Unlike most of the other Jackie films, I had never seen this one before, so I imagine my enjoyment of it will only grow with time. Even with the more limited action, definitely give this a whirl if you’re a Jackie fan.

The Young Master was Jackie’s second stab at directing and he delivered quite the film! It was kind of a flop in its day in Hong Kong, which completely boggles my mind because it’s so awesome. And it’s easily better than his first film, The Fearless Hyena, which made roughly five times as much at the Hong Kong box office. Anyway, the film opens with an incredible lion dance scene that showcases Jackie’s wonderful choreography for both human bodies and the camera, there’s the dope bench fight with Yuen Biao, and a rousing finale with Whang In-Shik. A great film that delivers the best Jackie-directed classic martial arts work, as well as a good amount of comedy.

Jackie’s first film to feature the Three Brothers (Jackie, Sammo Hung, Yuen Biao) is a wonderful blend of pirate hi-jinx and martial arts. It was on this film that Jackie plunged head-long into doing the big death-defying stunts he would later be known for. There are definitely stunts in the previous films, but nothing on the level of the clock tower fall in Project A. I can’t even imagine how anyone let him do it, let alone do it multiple times to get it just right. Plus the incredibly choreographed bike chase and did I mention it has Sammo Hung and Yuen Biao, too?

The Project A films are about neck and neck for me, but I put the sequel a spot higher because this one really delivers on a lot of levels, namely story and writing (something the original, and most Jackie films, are a bit lacking on). The script here is incredibly tight and intricate, pulling together many varied threads for maximum entertainment. It also is something of a template for Jackie’s films after it, as Police Story II, Dragons Forever and Miracles all feature similar situations of characters needing to hide from one another (with hilarity ensuing). Oh, and the big stunt is incredible, and it comes right after another massive stunt! 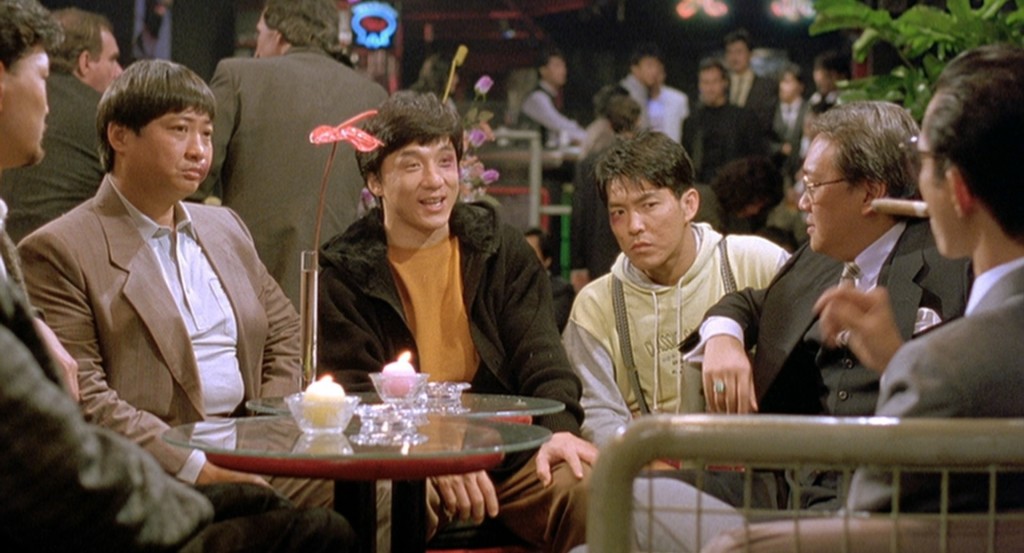 Dragons Forever was the last film where Jackie, Sammo and Yuen Biao worked together, and it’s one of the best. It’s a shame they could never resolve their differences to make another film together, especially now, almost 30 years later. I’d love to see an “old men” Three Brothers movie! That being said, with Dragons Forever they basically did everything you could want in a Three Brothers movie, and they did it incredibly well. There’s something to be said for bowing out when you’re on top! The rematch fight between Jackie and Benny the Jet is definitely the highlight, but the Jackie fight on the boat is also one of my favorites. The whole film is basically non-stop fun for fans, so if you haven’t seen it, get on it!

Police Story, like Project A before it, is one of the most important Jackie Chan films, further refining what would come to be known as the Jackie Chan style of film, combining insane stunts, incredible martial arts and comedy. What really stands out to me, though, is all the glass that gets broken. There are few things more visceral than breaking glass, and in Police Story it’s like Jackie breaks just about every pane of glass in Hong Kong. A true landmark in his filmography, albeit one that I think might be hard to understand without some context of Jackie’s career leading up to it. Or not. Whatever. Just watch it! 🙂 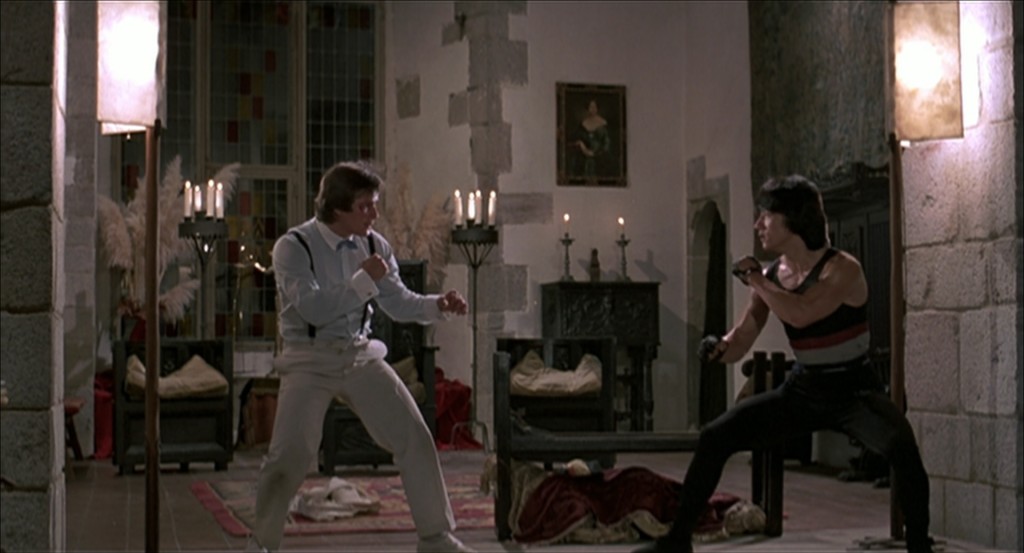 I don’t know if there’s any one-on-one battle that I like more than the one in Wheels on Meals between Jackie and Benny the Jet. Not only does it feature two incredibly capable martial performers at the peak of fitness going toe-to-toe, it represents a wonderful blend of Jackie’s fighting style and Sammo’s direction and choreography. I tend to think that Jackie is at his best when he’s collaborating with great people, and Wheels on Meals is a perfect example of this. 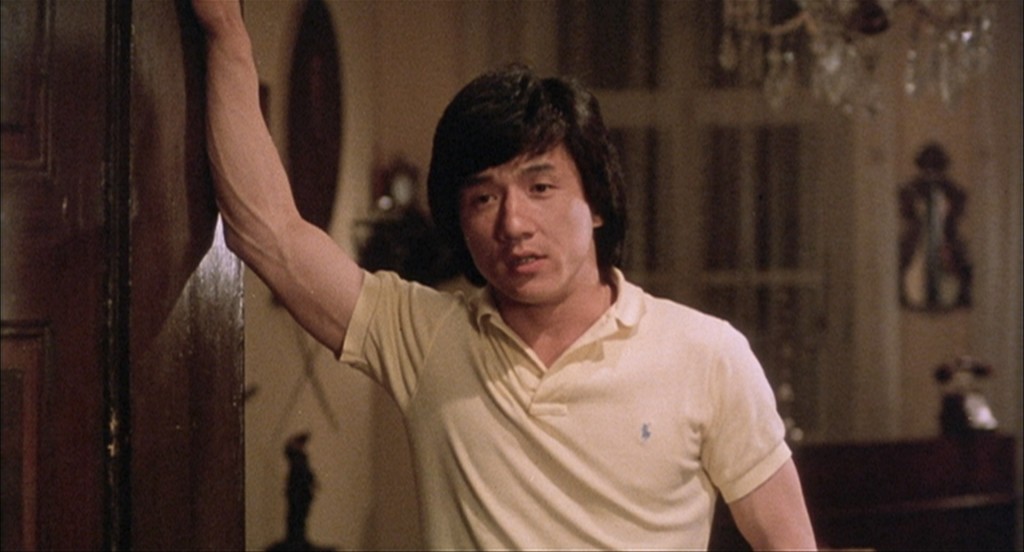 My favorite of Jackie’s ’80s films is Armour of God, though. Where Project A and Police Story represent the progression and gestation period of Jackie’s definitive style, Armour of God is that style fully realized and unleashed. It’s actually fairly light on fights, but it makes up for that with an incredible car chase and almost back-to-back battles near the end that are both stunning in different ways. I think it’s the way that the film melds together the Jackie style with the globetrotting adventure of Indiana Jones or James Bond that really gives this one a leg up over the others for me.

So there you have it! What are your favorite 1980s Jackie films?