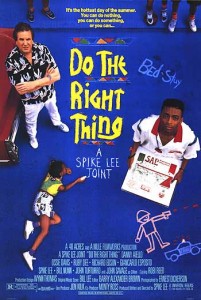 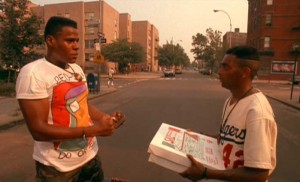 The difference with Do the Right Thing is that for the first time all the elements come together and work perfectly. She’s Gotta Have It is a very good movie, and an excellent début, but it borders on art film in some ways, which may detract for some viewers. School Daze is fantastical and surreal, whilst attempting to depict the experiences Lee had while attending college, but it is only barely watchable for me. It’s well shot and definitely has its moments but overall it didn’t resonate with me much at all. Do the Right Thing isn’t mainstream by any stretch, but it is easily Lee’s first easily accessible movie to a general audience. For this reason, the film shot him into the consciousness of many new viewers and it established him as a première African-American filmmaker.

Do the Right Thing tells the story of one day in the Bed-Stuy neighborhood of New York, one day that is a microcosm of the racial tension in America. The film does not have a defined plot line, instead freely flowing from character to character and slowly charting the course of their day as the sun beats down on everyone. The film is a wealth of symbolism as well, which leads me to my opening statement of the film being quite challenging. I always have something of a struggle decoding well-layered symbolism and Do the Right Thing is no different. Even if I am able to understand it on a deep level, I still have an aversion to sitting down and breaking everything down. 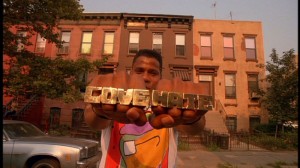 So let me just say this, the film is a call to action for all people. A call to action to stand up against racism and injustice it its many forms, but to do so intelligently. The film ends with two quotes, one from Martin Luther King, Jr. and another by Malcolm X. As you might expect the MLK quote is one of non-violence, while Malcolm X’s is one that calls for violence as self-defense. The ambiguous nature of the final act, coupled with these two quotes and the title of Do the Right Thing, makes the film’s overall message incredibly debatable. It’s no surprise that this was “the most talked about film of 1989” because viewing it demands that you talk about it to work out your feelings for it.

The riot at the end should be hard to watch and challenging, because it is so heartbreaking on a human level. The sun beats down on everyone throughout the entire film, making the day nearly unbearable. When the temperature cools and day turns to night, the fiery actions of Giancarlo Esposito and the explosive reactions of Danny Aiello keep that heat alive, and just as the sun spares no one, the violence hurts everyone as well. The mob isn’t the smartest way to handle the situation, but after the death of Radio Raheem, the people of the neighborhood cannot be expected to simply sit back and take it. They need to immediately release their frustration and Mookie’s trash can through the window is the catalyst to that release. I don’t think the focus should be on if Mookie did the right thing, but rather if his actions can be understood in the moment. I’m personally much more on the side of MLK, but if I just saw my friend murdered, I can’t honestly say that I would keep my level head. If the residents want to be respected, they must take action, but unfortunately their emotions got the better of them and they lashed out at the place that represented the white establishment, instead of the true culprits of the tragedy. 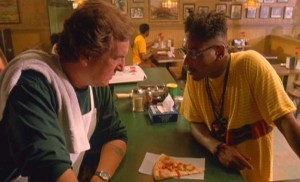 Technically, the film is a masterpiece. The cinematography is the stuff of legend with brilliant colors popping and clever camera movements all around. Dutch angles are used to great effect throughout to indicate the tension felt between two parties. How did this not even get nominated for cinematography? Do the Right Thing is a truly gorgeous film, but I’m sure the controversy outshadowed its technical brilliance in the eyes of awards voters. Which reminds me that this didn’t get a Best Picture nomination either. The Academy Awards have always been a somewhat bullshit endeavor, but this oversight (and Driving Miss Daisy being awarded the coveted Best Picture honor the same year) is one of the greatest Academy fuck-ups in recent memory. That fact alone says a lot about the state of racial relations in 1989 than any film could hope to convey.

Do the Right Thing is one of the most controversial films of the 1980s and it continues to hold a fiery place in history. It is a film characterized by conflict and tension and one that should be seen and studied by all. Filmed on location in the Bed-Stuy neighborhood in which it is set, Do the Right Thing challenges and asks the viewer to contribute something to the discussion. Any film that can continue to do that over twenty years later is truly something special.