Click the play button above to listen to the Django theme while you read! 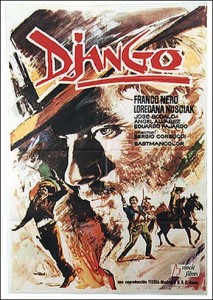 There is one thing about the character that you learn pretty quick and cannot ignore. Django does not fuck around. When faced with insurmountable odds, a local barkeep says, “…but you can’t do it alone.”

Django takes a drag from his cigar, without a care in the world. “I am not alone.”

How could he be so confident in this situation? He opens his coffin and it suddenly all makes sense. Contained within is a huge machine gun that fires multiple bullets at once from multiple barrels. I don’t know if such a gun exists in real life, but if it does I’m glad that I saw this before I found myself facing off against one. He slaughters the oncoming force of roughly 50 men in 30 seconds and shows no remorse whatsoever. He takes out his pistol as a few lucky ones flee and shoots the men’s leader, Maj. Jackson, off his horse. He lands face down in the mud. Django’s final pistol shot is arguably the most powerful of the scene, as it manages to do three things. It humiliates Maj. Jackson and sends him packing. It places a period at the end of a rapid-fire sentence, letting everyone know how ridiculously badass Django is, further illustrating that Django does not fuck around. It also shows that Django doesn’t use the machine gun out of necessity or to make up for a lack of skill. He uses it by choice and he is more than capable without it.

The film features a story that seems at least in part taken from Yojimbo. The lone stranger comes into town and finds himself in the middle of two warring factions. They are the Americans, who wear red scarves and hoods ala the Klan, and the Mexicans who are not much more than clichéd savages. Both parties fight to possess a girl who Django saves at the beginning of the film, but the story is really playing second fiddle here to the great set pieces throughout. There’s the big machine gun reveal that I mentioned above and the second half explodes with great, action-packed moments. Most Westerns feature a saloon fist fight at some point and Django is no different. It is shot better than most though, remaining fresh and exciting. There’s a quick shot of a punch coming directly at the camera towards the beginning of the fight that really sets the dial to excitement and the action never lets up. 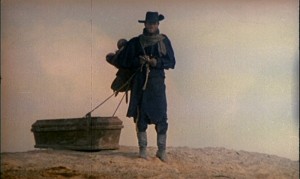 Franco Nero is perfect in the role of Django. He is calm and quiet, but you can sense the powerful storm that rages under those cool, blue eyes. The supporting cast is not as good overall, but certain members stand out, such as the Mexican general played by José Bódalo (who reminds me of Keenan Wynn a bit). I don’t think Keenan Wynn ever cut off a dude’s ear and fed it to him though. If you’ve seen Reservoir Dogs, this is the movie where that ear-cutting scene comes from, and it’s arguably more hardcore in Django than it is in the later film. Django is notable for featuring this kind of extreme violence, something rare at the time of release. The film received a number of bans around the world because of this, notably a 30-year ban in the UK.

The film’s score was composed by Oscar-winning* composer Luis Bacalov and he does a great job for the most part. The Django theme song (featured above) is excellent and will be stuck in your head for quite a while after the film has finished. It’s by far the standout track, but there are lots of great instrumental pieces as well. Some of the music sounds a bit too close to American Western film music for my taste, but this is a minor complaint that only a film score nerd like myself is even going to care about. 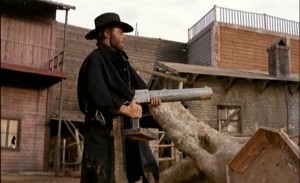 The film is generally well shot and edited, but doesn’t approach the masterful levels of Leone. I don’t think they were really going for that, but it is important to know this going in. Leone’s westerns are all about tension and how it builds as two people share a conversation, especially in his later films. Django has very little tension and is more about having fun and being wild. That being said, this is still a high point of the spaghetti western genre and one of the best westerns to come out of 1960s Italy. Dragging a coffin with a machine gun inside it is a smashing good idea and one that any Western fan can’t argue with. Initially, the film seems to be paced a little too slow, but as it unfolds you realize that the film is expertly plotted, revealing itself fully at its culmination. Things that seem fleeting come back to play a role, making for a very enjoyable ride. This is a film that will only get better with repeat viewings. 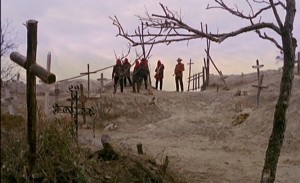 It all leads up to the finale, a scene that is truly something special. It transcends the rest of the entire film in its level of tension and excitement. Without ruining anything, Django finds himself seriously down on his luck, stripped of his tools and truly alone. For the first time, his life is on the line for real and for that reason this scene is easily the best in the film. After watching this, I can’t help but be frustrated that Nero and Corbucci didn’t make a direct sequel immediately following this, instead letting a rash of random people jump on the Django train and make their own watered-down versions of the character. Franco Nero did make an official sequel but it wasn’t until 1987, and even that isn’t a true sequel as it is set in the jungle and has more of a Rambo vibe than a Django one. If only they had struck while the iron was hot, I think this could have easily been as popular as the Clint Eastwood/Sergio Leone “Man with No Name” pictures and made Nero a huge star. Unfortunately, that was not to be and we are only left with the multitude of clones.

Come back tomorrow as Uncle Jasper takes on 1969’s Django the Bastard in Day two of A Fistful of Djangos!