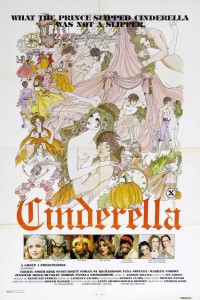 And they wouldn’t be wrong, as Cinderella‘s plot is pretty dumb as it wanders around the traditional story we all know. In this version, the prince was once a legendary ladies man, but now he’s seen (and done) it all and he’s fallen into a melancholy about his sex life. This leads to one of the best songs in the film, which I’ve provided below. The prince sings his song while four writhing, naked women do what they can to wake the beast within him. It’s a single shot as well, which is technically impressive for a film that for all intents and purposes is just trying to capitalize on the novelty of its premise.

(That voice at the end is of the court jester, who pops in every now and then to offer quick gems like that one.)

Anyway, the jaded prince decides to hold a ball for all the fair maidens of the land to come to the palace and present themselves as potential brides of the prince. One of these fair maidens is, of course, Cinderella, who spends her days cooking, cleaning and doing anything and everything for her step-mother and step-sisters. And “anything and everything” includes working a spinning wheel connected to a couple of corn cobs (y’know, to make them rotate) in the step-sisters’ bed. Yup. It is what you’re thinking. 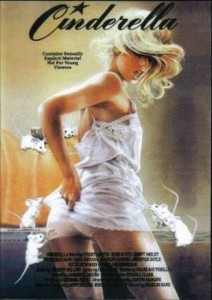 While the film does offer its share of strange, entertaining moments through its first 30 or so minutes, it’s not until the Fairy Godmother shows up that the party really begins. Here the character is played by Sy Richardson (in his debut role), and he’s not so much a godmother as he is a thief who has come into some magical powers. While this character definitely livens up the film and offers some laughs (he’s easily the most charismatic of the bunch), he also offers a lot of racially themed jokes that would only fly in the ’70s. The thief aspect of his character reminded me a lot of Kat Williams’ role in Scary Movie 5 (judging from its trailer alone), so, at least anecdotally, race roles in comedies haven’t progressed all that much. Richardson plays the jive-talking caricature that many black actors did at the time, so the character is equal parts entertaining and groan-worthy. Richardson is one of the few actors to look like he’s having much fun, though, and he does make the film a lot more watchable. But I have to wonder what Richardson thought of the material as he performed it.

If you’re just here for nudity, Cinderella offers a pretty much non-stop parade of naked bodies. I’m not exaggerating either, there’s so much that it made finding suitable screenshots rather difficult. The grand ball at the end quickly devolves into a game of Spin the Bottle (although here it’s called “Butt-Gammon”), except “the bottle” is a black dude in tights dancing around and pointing at nubile young women, and the prize is to fornicate with the blindfolded prince. After a few of these softcore sessions, Cinderella is finally selected and it is here that we finally understand what all this talk about the Fairy Godmother giving Cinderella a “snapping pussy” is all about. It turns out it’s more literal than I had first envisioned it to be, but judging by the prince’s orgasmic reaction, it was definitely a good thing. My favorite thing about this scene are the sounds of gobbling and chewing that accompany their lovemaking. It also leads us into a song about the snapping pussy, which is rather fun just on novelty alone.

But as the story goes, we know that Cinderella does not live happily ever after right away. She is whisked off by the Fairy Godmother before the stroke of midnight turns their coach back into the watermelon and snails it was made from. She leaves a shoe behind and so the prince must see who it fits. Oh, and wouldn’t you know it fits more than a few of the fair maidens of the country, so I guess he’ll just have to fuck them all again to see who indeed has that desirable snapping pussy. One of the non-Cinderella girls claims that her pussy can snap AND crackle, while her sister boasts that her’s pops. The prince, while hopeful, doesn’t find what he’s looking for. Thank you, Prince, but your snapping pussy is in another thatched hut.

Cinderella was one of the earliest productions from Charles Band, and these first films offer us a great microcosm of his later work. Not counting the lost film, Last Foxtrot in Burbank, Band’s first three productions were Mansion of the Doomed, Crash!, and Cinderella. Mansion of the Doomed represents the low-budget, legitimate horror film, somewhat hampered by its budget but ultimately very enjoyable. Crash! is the type of film to take a crazy idea and run with it, something Full Moon would later do in nearly every one of their films (to varying results). And Cinderella represents Band’s continued forays into gratuitous nudity and the softcore genre, even creating an offshoot company (Surrender Cinema) to film many of these types of films at the height of Full Moon’s power. I always enjoy seeing someone’s artistic roots, and I’m not surprised in the least to find that Band’s roots are much the same as his current output, just without that indescribable, but always instantly recognizable Full Moon feel.

Cinderella is a film I won’t soon forget. Not only was it interesting to see what passed for softcore back in the late ’70s, it also taught me that at the time there was a sub-set of people who were actually interested in a softcore musical comedy. The film was a fairly large success, spurring Band into creating the similar (and presumably just as hump-tastic) film Fairy Tales. I wonder if that one will feature an equally disturbing dream sequence. Oh, I didn’t mention the dream? It’s really nothing special… just some dream where an old man eats a whole rose before milking Cinderella’s breasts, which then leads to the step-sisters raping Cinderella with their corncob vibrators, which, of course, leads to Cinderella’s vagina popping popcorn. It’s an “interesting” film to say the least, so if you’re looking for a softcore musical (and who isn’t), then definitely add Cinderella to your list!

UPDATE 2/20/2015! Full Moon has released Cinderella on DVD! This is the first time the film has ever been on DVD in the US! You can buy it from Amazon here or direct from Full Moon here.

In two weeks on Full Moon Tuesday, I’ll be checking out the 1987 sci-fi comedy, Galactic Gigolo, unless Netflix decides to be cheeky, in which case I’ll be cheeky back and hit up another of these 1970s sex comedies, 1979’s Fairy Tales!