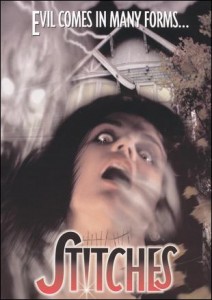 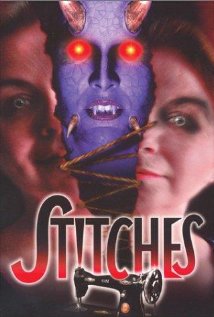 The things that sets Stitches apart from most Full Moon films is that it’s really not all that trashy (even if it does feature a fairly groan-worthy and forced insertion of clothed lesbianism). This was notable Full Moon screenwriter Benjamin Carr’s first and only foray into directing, and judging off the talent here he really should have continued. Carr uses lots of dutch angles and edits the more intense moments perfectly to increase the tension. Of course, that suggests that there’s tension and intensity, but honestly I’d be lying if I said there was much. The characters are all paper-thin (ironic because their souls are eventually imprisoned in paper dolls by the demon), so we don’t care about any of them. It’s more of a “root for the villain” type of film, but as there’s almost no gore or FX in Stitches it will definitely not satisfy most horror fans. It’s much more subtle, slow-paced and dialogue heavy than it needs to be, but y’know, Full Moon was tight on money. The DVD’s commentary even reveals that the opening credits were ripped directly from another Full Moon movie (Witchouse) to save money.

While the direction might show some promise, the cinematography could definitely use some work. Some shots are well-lit and look OK, but many shots make it look like a high school play recorded from a good vantage point. It’s a shame because the set dressing and costuming is actually rather well done for a Full Moon film, and with better work behind the camera it could have been engrossing instead of sticking out as a fault.

But the main problem that killed this movie for me was the second half. I’m of the mind that a re-watch would actually clear up some of my issues, though, as instead of incompetent filmmaking it felt like I just missed something. I guess I was just frustrated that they pushed the old woman/demon to the side, in favor of having her take over the bodies of some of the members of the house. At first, none of that stuff made sense as I was mentally drifting a bit, but then I noticed a key point that made it all clear. Anyway, even if this problem would be better on a second play, it wouldn’t help the film’s poor pacing issues. At only 80 minutes, the second half alone feels that long. While the first half sets everything up and gives us a couple of very interesting, non-gory kills, the second half just plods along on what was already built up, without adding anything or paying off in any real, satisfying way. I ultimately liked the ending, and I liked a lot of specifics in the second half, but it felt like it needed another draft to really tighten it up.

But as I said before, my issues didn’t completely kill my enjoyment of Stitches and it still comes out as one of the best made, and quite different Full Moon films. I’m not saying it’s the most enjoyable of their films, but it does sets itself apart from the general Full Moon catalog at nearly every turn. While I’m tempted to say that I’m surprised a film of this quality would have come out during Full Moon’s troubled days, I think I know why this is: desperation. Charles Band was ready to try anything to save his studio, and Stitches, a subtle attempt at a quality, low-budget horror film, stands out as a very good (and cheap to produce) film from the studio’s offerings.

Next week on Full Moon Tuesday, it’s time to check out a brand new Full Moon film! Check back next Tuesday for a look at Killjoy 4: Killjoy Goes to Hell!