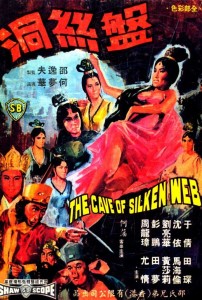 Expectations: Moderate. The last one wasn’t as good as the first.

Third in the Shaw Brother’s series of four films based upon the classical Chinese novel Journey to the West, The Cave of Silken Web is a definite step up from the previous sequel Princess Iron Fan. The focus is tightened here to one story for the entire film and it serves the arc of the story and the film better than the episodic format that the earlier films had. With only one story to focus on, director Ho Meng-Hua and his wonderful group of actors can really settle into their roles and have a great time. Not to mention that the villains here have real weight and pursue our heroes relentlessly. Chow Lung-Cheung takes over the role of the Monkey King for this film, and while he’s not quite as emotive or charismatic as Yuen Hua was, it’s pretty seamless and most viewers probably won’t even notice the difference.

The Cave of Silken Web starts off like any other story from the series, with the monk Tang and his band of protectors riding West in search of Buddhist scriptures. While looking for a place to stay for the night, they are tricked into the evil plans of the seven spider-demon sisters of the Cave of the Silken Web! They are quite devious and before you know it, Tang is turned into mist and captured in a vase and all seems to be lost. Of course nothing is yet written in stone, as the Monkey King, Pigsy and Sandy are all diligent followers of Tang and fight tirelessly to free their master.

The first half of the film is something of a rehash of most of the previous stories, but the film really hits its stride come the second half. The action moves completely within the cave and it’s a non-stop ride to the finale with all kinds of mistaken identity and hijinks that only the Monkey King can provide. Everything else takes a backseat to the last couple of minutes though when Sandy’s acquisition of the deadly Seven Flames is unleashed. The Seven Flames is the only thing capable of counteracting the seven sisters’ spider webs and it’s basically just a flamethrower disguised as a large jug. Watch as Sandy and the Monkey King lay waste to all kinds of shit with a flamethrower! I defy you to not be entertained by that! This is the first flamethrower I’ve seen in a Shaw Brothers film, and I sure hope it isn’t the last. This isn’t the type of movie I’d expect a flamethrower to pop up, but I ain’t complaining!

And if nothing else, The Cave of Silken Web teaches one very important lesson. No matter how powerful or supernatural you are (or think you are), a big rock to the back of the head is always capable of knocking you out. So watch your backs and give this one a shot. It’s not necessary to see the preceding films first, but it will help quite a bit and I recommend it.