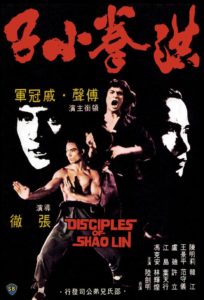 The reason Wang is so adamant about this is very integral to the film, and to truly discuss the film it will be hard to avoid spoilers (but I will do my best). Chang Cheh visually articulates the importance of the reasoning in a rather interesting and subtle manner. As with Men From the Monastery before it, Chang chooses to strategically play two key scenes in black & white (and in one, he switches back to color within it to superbly communicate a character’s realization of the truth). The connection between these two black & white scenes is key to the characters of Wang and Guan. The two scenes are borne out of similar circumstances, but the reactions by the characters are completely different.

As I mentioned before, Wang is a man of responsibility and duty. He reacts in a way you’d expect such a man to react, with confidence and a firm hand. Guan is a much different character, one who has always been more reckless. They have both been poor their entire lives, but where Wang puts his nose to the grindstone and accepts it, Guan has always lived his life with pride and dreamed of becoming a somebody. Not necessarily rich, but recognized and able to provide for himself. Due to this alignment of his character, Wang knows that Guan is a perfect candidate for manipulation and it pains him that nothing he says or does will sway his brother from this path.

Disciples of Shaolin is quite well-written by Chang Cheh and Ni Kuang. It definitely has some stumbles, but the film is packed tight with intense and effective emotion. When a character can do something as simple as reach for his shoe and it brings a tear to your eye, you know the filmmakers are doing something right. This character drama is encased within a fairly standard martial arts plot about rivals trying to undermine each other, in this case a pair of textile mills. One is run by a nefarious Manchu (Chiang Tao), the other by a man who can barely be bothered to take in interest in his business or its affairs (Lo Dik). Through these villains some great social commentary flourishes around materialism and the oppression of the poor working class. Both overt oppression and mistreatment through apathy and lack of knowledge are equally represented, and woven into this we are shown how the practice and application of the Shaolin teachings can provide ample tools to fight such oppression.

The film’s place in the Shaolin cycle is an interesting one, too. It explores the previously unexplored avenue of the later students of the Shaolin arts. At the point in time when Disciples of Shaolin takes place, Shaolin teachings have been passed down and around, to the point that uninvolved people like Wang and Guan are well-versed in the arts. They are not historical figures or folk heroes. They aren’t refugees from the burning of the temple or practitioners tasked with the survival of the arts themselves. They are just regular people with manual labor jobs and tattered clothes. The Manchus are still in power and doing their best to oppress the Chinese people, but here there is no temple to burn down. The teachings have spread beyond a physical place. The disciples themselves have become the temple, and the temples are many. These men represent the effect of the many efforts to preserve the arts, as seen in the previous Shaolin Cycle films, notably Five Shaolin Masters and Shaolin Martial Arts.

The choreography was handled solely by Lau Kar-Leung on this film, and as you’d expect he does a fantastic job. Disciples of Shaolin is not packed with fights, but when it does let loose, it doesn’t play around. Long takes and flowing choreography are doled out in equal measures sure to delight fans of martial cinema. Fu Sheng’s fight with Fung Hak-On is superb, transitioning from hand-to-hand, into a group fight, and then into a one-sided weapon fight when Fung Hak-On tries to end it quickly by arming himself with a staff. It’s seamlessly handled and exceptionally performed by everyone involved. Fu Sheng’s self-assuredness never wavers throughout the entire scene, too, proving once again why he quickly became one of Hong Kong’s most beloved stars.

Next up in this chronological journey through the Shaw Brothers Martial Arts catalog is Kuei Chih-Hung’s sequel to his hit film The Teahouse: Big Brother Cheng! See ya then!