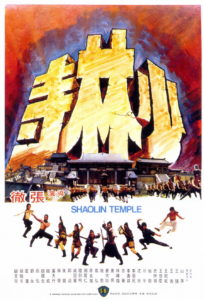 Shaolin Temple isn’t Chang Cheh’s last Shaolin film, but it is the last in his Shaolin Cycle that began with 1974’s Heroes Two. His later Shaolin films with the Venom Mob actors may relate in some ways, but I consider them separately from the Shaolin Cycle films. Anyway, Shaolin Temple is a great finale to Chang’s non-linear series with a habit of contradicting itself and re-telling different versions of the same story. Shaolin Temple showcases something that has been talked about in just about every film, but has yet to be shown in its full glory: the Shaolin Temple itself. In classic Chang Cheh fashion, it’s also not a typical martial arts film; it’s one that puts the Shaolin Temple and its teachings at the forefront of the film, above character development and even plot. If you’ve seen all the previous entries, this isn’t a big deal, but newcomers might be a little lost with the sheer amount of characters in the film.

Shaolin Temple is basically a prequel to Five Shaolin Masters and Heroes Two/Men from the Monastery/The Shaolin Avengers (and while we’re building shaky Shaw Shaolin timelines, Lau Kar-Leung’s The 36th Chamber of Shaolin would come directly before Shaolin Temple). It also re-tells/re-imagines certain aspects that would tie into those films, so it’s not the type of prequel that completely works. That doesn’t matter in this case, though, as these are folk tales just waiting to be re-imagined and re-told as the teller sees fit. In any case, the film opens with Hung Hsi-Kuan (here played by Wang Wai), Fang Shih-Yu/Fong Sai-Yuk (Alexender Fu Sheng), and Hu Huei-Chien (Chi Kuan-Chun) kneeling outside the Shaolin Temple in hopes of being accepted for training in the martial arts. The Grand Master (Ku Wen-Chung) decides that after five days of kneeling, the men are dedicated enough to withstand the hardships of Shaolin training. What ultimately sways him is his feeling that if he does not teach them, the very survival of the Shaolin martial arts might hang in the balance. They enter the temple, and it begins a new era of the temple training outsiders to aid their resistance against the oppressive Qing government.

Along with Hung Hsi-Kuan, Fang Shih-Yu, and Hu Huei-Chien, the well-trained Five Shaolin Masters seek refuge in the Shaolin Temple from Qing forces. David Chiang, Ti Lung and Johnny Wang Lung-Wei reprise their roles, but since Fu Sheng and Chi Kuan-Chun played Ma Chao-Hsing & Li Shih-Kai in Five Shaolin Masters, they are played by Lau Wing & Yueh Hua, respectively. Wong Chung also takes over Fang Da-Hong from Mang Fei. In addition to these characters, there is another wave of new recruits after Hung, Fang & Hu: Zhu Dao (Bruce Tong Yim-Chaan), Lin Guang Yao (Phillip Kwok Chung-Fung) & Huang Song Han (Li Yi-Min). These groupings of characters represent different skill levels from recruit to graduated masters, and it allows Chang Cheh to structure the film to tell a story without focusing on any one of them. He already made entire films about most of these characters, so the goal in Shaolin Temple is different.

The central point is the dedication, repetition and training involved in Shaolin teachings, with the “villain” for most of the film being the students’ stubbornness or even the merciless Shaolin teachers themselves. There is a revenge element to the film, but it’s beyond minor. It’s more about controlling inner negativity, building up confidence and ultimately becoming a better person, instead of fighting and training specifically for that purpose. Through repetition of menial tasks like stirring congee, or simply jumping, characters train their bodies in ways unknown. Fang is one step ahead of the newcomer characters in terms of his time at the temple, and he gains another advantage when he spots a masked master practicing at night. He echoes his moves like every kid who watched The Karate Kid did crane kicks around the house, and it leads Fang to a feeling of false confidence. He challenges one of the masters, Ma Fu-Yi (Johnny Wang Lung-Wei), but he is immediately bested. It’s not just learning movements and looking the part. It’s an entire way of life, carved out of years of practice and dedication. Only through continuing to train can Fang hope to beat Ma Fu-Yi. This altercation is not a central struggle of the film, it merely illustrates the point of repetition and training that is repeated throughout Shaolin Temple.

With all this training, the action is relatively limited in the film until the finale. This isn’t a problem, in fact it makes the non-stop barrage of battles in the 3rd act rather impressive and cathartic. Unlike the tiered one-on-one battles of Five Shaolin Masters, the focus here is on the amount of action and its breadth, instead of any one specific battle. This is somewhat disappointing as someone who prefers one-on-one fights, but in the face of so much well-choreographed action I would be a fool to complain. I don’t think the choreography is on par with Lau Kar-Leung’s work at the time, but the team of Hsieh Hsing, Chiu Wai, Chen Jih-Liang, and Chan San-Yat make a valiant effort that stands the test of time. These are students after all, forced into action with only a moment’s notice. Whether the students have learned enough or not, the time has come to exercise their skills as best they can. Some make it and some do not, but the arts continue thanks to the survivors and the abbot’s decision to train others.

Shaolin Temple tells the story before many of Chang Cheh’s Shaolin Cycle films, but I think its place as the last film is perfect. Watching it after everything that came before informs the experience considerably, and I don’t think watching it first would be nearly as satisfying. Whatever order you see it in, though, Shaolin Temple is a great look inside the temple (although definitely not as effective or dynamic as the later 36th Chamber of Shaolin).

Next up in this chronological journey through the Shaw Brothers Martial Arts catalog is the first film of 1977: Sun Chung’s Lady Exterminator! See ya then!