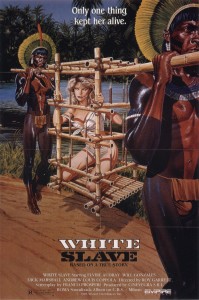 It’s always great when a movie completely surpasses your expectations. White Slave looked like a dumb, low-budget exploitation movie from its poster; its tagline promising some sort of sexual exploitation as well as the “savages vs. civilized white people” stuff that many jungle movies trade in. But White Slave is actually a pretty damn good movie. It’s not great, and it has a lot of issues, but overall I really enjoyed it.

That enjoyment really came down to the storytelling. The basic story is simple and something of a known quantity: a nubile, 18-year-old blonde girl is captured by some headhunters, stripped of her clothes and forced to live as one of their own. It’s like The Searchers, but focused on the captive instead of the ones trying to rescue her… and there’s no one trying to rescue young Catherine Miles. 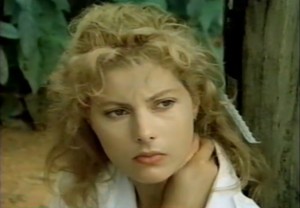 But where the story might be standard, it’s the framework built around the simplicity that gives White Slave its intriguing qualities. The film opens by introducing itself as a true story, only just related to a journalist and shared with the world. Catherine Miles is on trial for a brutal double homicide, and as she tells her tale leading up to the murders, we see it! Movie magic! This knowledge that a double homicide is coming informs a lot of the scenes, although there are quite a few errant questions by the lawyers, such as, “What did you do with your time?” that result in a lot of unnecessary footage such as Catherine and the native women gathering fish down by the river. This particular scene does lead to a rather brutal alligator attack, but even that bloody delight is meaningless in the grand scheme of things, except to relate an air of “native slice of life” to the film.

The violence is especially brutal, and while it isn’t wall-to-wall gore or anything, it’s definitely in the exploitation realm. Something like five or six people get their heads cut off over the course of the film, and just about every one is punctuated by a graphic, brutal shot of a knife hacking away at flesh with deep red blood oozing everywhere. The graphic violence is more than exploitation, though, it lends the film something of that realistic, “based on a true story” vibe that the filmmakers are going for. In some regions this was billed as a sequel to 1980’s Cannibal Holocaust, the first film to use the found footage technique that’s become so popular these days, and while there aren’t any cannibals here, it definitely has a found footage feel in spots. That being said, a lot of the violence is cheesy and unrealistic, but if you buy into the film’s world, it actually adds a lot of weight to the film’s scenes. 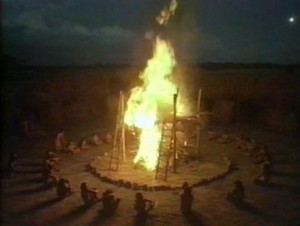 Because this is a low-budget Italian movie, that means there’s lots of bad dubbing. The film’s soundtrack is rather well-constructed, but cheap dubbing always looks and sounds like cheap dubbing so it’s hard to overlook it, especially as the film begins. It gives the film something of a Spaghetti Western vibe for me, as that’s the genre I’m most familiar with in terms of cheap Italian dubbing. In any case, it’s not a huge issue, but definitely something to consider when watching this one. And after a few minutes, you won’t even notice. The natives speak their own language, which is not subtitled, and this helps even further to allow the audience to connect with Catherine’s character.

There are also some very nice and clever uses of nature stock footage, showcasing jungle wildlife and well-shot scenery. If you’ve ever wondered what a leopard hunting and killing a monkey looks like, this is your movie. Seeing this film so close to watching Badlands, I couldn’t help but see some similarities between the two films using footage of the natural world that surrounds their characters. Malick’s footage is definitely better shot, but the results, at least to me, were very similar. The jungle setting and a couple of lengthy “going down the river” scenes also led me to think of Herzog’s Aguirre: Wrath of God. 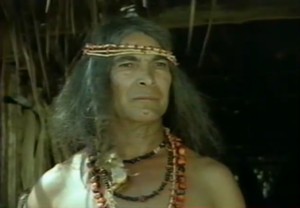 So with White Slave reminding me of two outta three of my Blind Spot reviews I’ve done so far, it’s only natural for me to force in a reference to the third, Ace in the Hole! While I can’t come up with any real parallels between the two films, White Slave definitely has an “ace in the hole” in regards to its story. The whole time we’re working towards the double homicide, wondering how it will go down, but I never could have guessed what it actually is. It’s nuts, and I absolutely loved it. In certain respects, the scene itself is somewhat underwhelming, but the narrative power and the sheer absurdity of it all was more than enough to completely satiate me.

Also, I just want to note that White Slave features a lot of nudity. The main character is nude for roughly the last hour of the movie, and every native woman is equally nude or topless in their scenes. But while I’m nearly positive this was done out of an exploitative mindset, it honestly never comes off that way in the film. The nudity never feels sexualized or gratuitous, instead it adds a truth and realism to the film that would otherwise be lacking. At some point, I actually stopped noticing the nudity, as I was so engaged with the story and the characters.

White Slave really surprised me and I thoroughly enjoyed it. It meanders around a bit too much in its first two acts, but there’s still lots to enjoy in the lead-up to a great third act. If you’re into B-Movies, especially Italian ones, White Slave is definitely one to check out.

Next week on Full Moon Tuesday, I’ll be piecing together the horror of 2002’s Jigsaw!