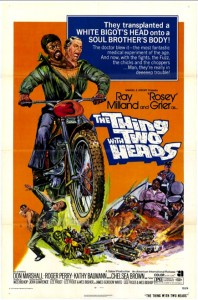 I can get behind any film that casts an Academy Award winning actor alongside ex-defensive tackle Rosie Grier as a half bigot, half convict… thing with two heads. In concept alone, this film is a stroke of genius. You can tackle the race issue with slow burning drama ala Guess Who’s Coming to Dinner, or dress it up in the guise of a police investigation like they did with In the heat of the Night. But it takes a real visionary to slap a racist-spouting, prosthetic Ray Milland head on Rosie Greer’s shoulder and call it a day.

The Thing with Two Heads could have a brilliant statement, forever ridding the world of racism and making boys and girls of all colors join hands and sing in the streets, but instead it decides that what we really need to mend hate and end injustice are a shitload of car chases and dirtbike races! Don’t get me wrong here. I don’t need no message up in my movies in order for me to appreciate them. I can get along just fine with explosions, dismemberment, or lasers. But this film sets itself up for some very interesting opportunities and chooses not to explore them. Dawn of the Dead is a great film because it has the blood, gore, and head-explosions that we all know and love, but it also mines its own premise to reveal maybe just a little something about human nature and society at large without sacrificing all of that fun stuff. 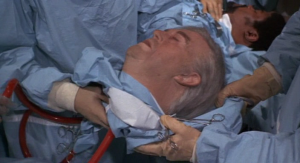 The film opens with Mad Scientist, Max Kirshner (Ray Milland) unveiling his latest breakthrough in the field of medical transplants to a small group of experienced surgeons. While the rest of the great thinkers in the medical profession have been wasting their time away with cures for cancer, Dr. Max has instead channeled his energy into a much nobler pursuit; a two-headed gorilla. He intends to eventually remove the gorilla’s original head, thus allowing the grafted head to claim the body as its own.

This is a very convenient coincidence because Max soon realizes that he has lung cancer and has but a few days to live. He sends his medical team out on an all points bulletin for a candidate willing to donate their body to science so he can have his men perform the body grafting experiment with his own head! After a prolonged search the team comes up empty-handed until the lieutenant governor allows a single death row inmate the opportunity to act as donor for the project. 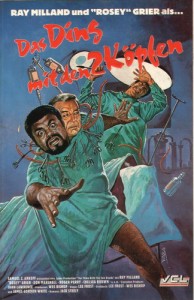 Enter big-ass, pissed off Rosey Grier, who has a bit of a chip on his shoulder since he is about to be executed for a crime he was wrongly accused for. Thinking that the experiment would give him at least 30 days to prove his innocence, he jumps on the opportunity and is shipped to Dr. Max’s medical facilities.

The operation goes off without a hitch. Max finally wakes and realizes, to his horror that his head has been grafted to a black man’s body! In addition to being one of the world’s greatest minds, Dr. Max is also a shameless bigot of the highest order, having nearly fired one of his most qualified doctors simply after realizing he was black. This of course leads to some pretty funny exchanges between the two-headed Ray / Rosie combo as the two go back and forth as Dr. Max gets all purple in the face while calling Rosie a “Black bastard” over and over again. Rosie does a good job of blowing him off since he has more important things to do, like proving his innocence. Still in control of the body, Rosie breaks out of the facility as soon as he gets an opportunity, with Dr. Max’s head in tow. Authorities are called into action and immediately give chase to the two-headed monster.

It’s at this point that the film kind of hits a brick wall. Instead of cherishing this beautiful cultural exchange and milking every opportunity it has to offer, it decides to give us car chase after car chase. Granted some of them are good, great even… And if you ever thought the mere mention of big ass Rosie Grier on a tiny dirtbike was hilarious, just wait until you see him doing that with a rubber Ray Milland head flopping all over the place… But It begins to get old fast, and when you hear whirring sirens and mutterings of “You black bastard!” for the fifteenth time, you really start to wish these two could just sort out their differences in a quiet room somewhere. 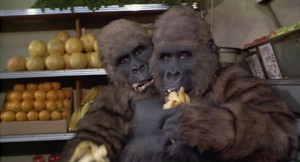 Which brings me to the point I initially made, Ray Milland begins the film an ignorant bigot, and ends the film an ignorant bigot. There is no character growth even though the film was ripe with opportunity. You would have thought ol’ Ray would have learned something from his experiences wobbling along on Rosie Grier’s shoulder for half of the film, evading the police and eventually enjoying a nice dinner with him and his girl. You would not expect this man to continue cracking watermelon jokes after the forced intimacy they shared during the film’s 90 minute running time. To quote the words of one of history’s greatest renaissance men, “Can’t we all just get along?”

I guess not. And this film fares worse off for it. You have to eventually get to this one, if only for the mere spectacle of it all. But don’t go in expecting groundbreaking social commentary packed beneath the cheap veneer of a B-movie.