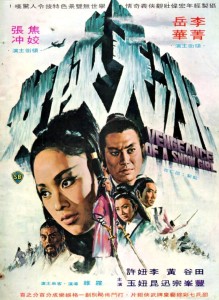 I can do with some setup and some character building, but what’s seen in Vengeance of a Snow Girl is to the point of ridiculousness. It’s compounded by the fact that the film is two hours long when the average Shaw film runs about 85 minutes. There’s really no need for it to be this long either, as you could arguably have better character relationships and motivations if the film was tightened up and focused on what mattered. I do have to give the film credit for being well-acted, and really well-staged (the production values are very high), but I was largely disinterested for most of the first 75 minutes. I also should note that I was being interrupted relentlessly during the first hour of the film, so that could have possibly contributed to my inability to connect with what was going on. Interruptions aren’t rare for me, though, so I should probably stand by my original thoughts. Like The Shadow Whip, Vengeance of a Snow Girl was scripted by both Lo Wei and Ni Kuang, and while this also doesn’t live up to the expectations that those names elicit, Vengeance of a Snow Girl feels like the better movie.

I know that doesn’t make a lot of sense given what I’ve written about the film so far. But I’ve been careful not to mention the final 30 minutes of the film, which are pretty close to being as much pure entertainment as you can expect out of a 1971 Shaw Brothers wuxia film. Everything about the last 30 minutes of this movie works great and brings all the threads together perfectly. What facilitates this awesome climax is the central journey of the film that really should have been the focus instead of just the final act. About halfway through, Tien Feng (who plays one of Li’s targets and the father of Yueh Hua) reveals that there might be a way to heal Li Ching’s crippled limbs. He sets out a couple of items that they would need to procure, and the on-screen realization of these acts is just as good as I had hoped it would be. It still took the film 30 minutes to actually get this fun journey rolling, but by the time we reached the inside of the volcano, I knew the rest of the film would be a treat. And it didn’t disappoint.

Many would call this third act of the film campy, and they wouldn’t be wrong, but given the Shaw Brothers’ usual approach to high-concept special FX, I found the stuff in this section of the film absolutely incredible. I don’t know if there’s a lot of call for a volcano interior set, but I hope on everything that is good and campy in the world that it shows up in a few of the upcoming films. I loved the set and I can’t imagine they’d create it and not use it more than once. For all I know it was leftover from one of their James Bond knock-off films (I’ve got to review those one of these days), but whatever it’s story, it was awesome. They should list it in the credits: “AND GUEST STARRING: THE VOLCANO INTERIOR SET.” Then I could say, “Oh, I love that guy! He always delivers the fiery goods!”

The fights are notable for being as dynamic as they are while featuring a crippled character. It’s hard enough crafting fun fights with two able-bodied combatants, but Simon Chui Yee-Ang & James Tin Jun do an admirable job bringing the character to life. She never feels at a disadvantage in the fights, so much so that I didn’t even notice that she was crippled during the first couple of fights! I can’t say that the fights are anything truly memorable or groundbreaking, but they’re impressive for integrating Li Ching’s character so well.

Vengeance of a Snow Girl was way too talky for most of the film (for me), but the final 30 minutes were fantastic, so I actually ended up liking this one. Didn’t see that one coming, that’s for sure! I’m glad, though, I always feel like Lo Wei gets such a poor reputation from martial arts fans and I’m always glad to find a film that reminds me how fun his films can be. They definitely have a distinct Lo Wei feel. Wuxia fans will enjoy this one, all others will likely have a very hard time getting through the lengthy setup period.

Next up in this chronological jaunt through the Shaw Brothers Martial Arts catalog is the long-awaited review of the Golden Harvest classic, The Big Boss! Are you ready to get Bruced? I can’t wait. See ya next week!