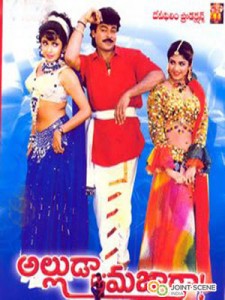 Expectations: High. Jasper sent me the opening action sequence on YouTube and it was one of the best things I’ve ever seen, ever.

Holy shit, if there was ever a movie that one review could not contain, this is it. Alluda Mazaaka…! is nuts, packing in everything you could ever want in a movie as well as tons of shit you never knew you needed to see until now. Alluda Mazaaka…! is the gift that keeps on giving, opening with one of the most exciting and explosive action sequences I’ve ever seen and holding my attention consistently through its near three-hour runtime. Alluda Mazaaka…! is an insane movie, and I only hope I can do it some justice here.

The story is a twisting, hilarious affair of betrayal and double-crosses but at the heart of the tale are Seetharam and his sister. Seetharam is a man unjustly accused of murder, and is being sent to the gallows as the film opens. His last request is to visit the temple of his village. Mourning his loss in advance, the women weep, the men lament the situation with frustration and calls of “Why?”, babies cry and small children cling to his feet as he enters the bus that will take him to his ultimate fate. Seetharam is a dude that inspires much love. But as they’re driving into the town to hang him, Seetharam spots a wedding taking place and absolutely loses his shit, unleashing one of the greatest and most destructive action sequences of all time.

No words can accurately paint the picture of all the glass-shattering, car-launching, horse-sliding, explosive action contained within this sequence; you just have to watch it for yourself. Did you watch it? Is your life forever changed after seeing it? Go on, watch it again; you know you want to. And that’s just the first 10 minutes of the film! The scene ends with Seetharam tying the auspicious thread around the neck of the bride at the wedding party which kicked off his rage. But Seetharam doesn’t do this at random, and it’s the task of the film’s first half to explain exactly why he’s done what he’s done.

During the second half, Alluda Mazaaka…! shifts from explanation to reaction, as the audience is all up-to-date and Seetharam can now exact his revenge. But in this film revenge doesn’t mean brutal murder and wanton destruction (although there is some of that during the thrilling jet ski/powerboat climax), here revenge is a dish best served through careful plotting, cross-dressing and familial conniving. This might not sound too exciting, but it’s ridiculously entertaining and pretty much non-stop sex comedy laughs. The dialogue flies by so fast that Howard Hawks himself would’ve had a difficult time keeping up with it, and while some of the humor is definitely lost in translation, for the most part it remains very funny.

Oh, and songs! Lots of songs! See what I mean, this movie has it all! I’m at a loss for how to succinctly describe the musical numbers as a whole. Not only are there traditional musical setups like a rousing wedding number that taught me how much fun throwing curry powder could be, there’s also a dream-based song where our hero and two of the female leads sing and dance under a giant psychedelic mushroom. And I can’t forget the outdoor song featuring ultra ’90s Cross Colours wear and an Indian take on Queen’s We Will Rock You during a breakdown. But if I had to pick one musical number that was my favorite, simply on WTF factor alone, I’d have to go with the final song — Save the best for last! — that features our characters singing and dancing around giant off-colored statues of distorted Disney characters, with insert shots of kids wearing Donald Duck masks while holding Mylar balloons. This is definitely not a film to be missed.

I’ve seen a lot of incredible fight choreography during my fascination with martial arts cinema, but in Alluda Mazaaka…! they found ways to flip the human body around that consistently shocked and impressed me. The fights are inventive and hilarious in their audacity, and while they’re not up to Hong Kong standards, they’re ridiculously fun to watch and always cranked to 11. The film features the first martial arts tractor fight I’ve ever seen, and honestly, they’ve set the bar pretty fucking high for any future entries into this very select sub-genre. The use of surrounding elements is very reminiscent of Jackie Chan, but the fights here are never going for realism. It might not be particularly believable to have Seetharama kick a dude to the floor, then pick him up backwards by his legs and flip him up so that he’s parallel to the ground, and then kick him right in the lower back so that he flips up into a spinning ceiling fan, but you can’t argue that it’s not an incredible moment in a movie absolutely filled with them.

Alluda Mazaaka…! is the product of the Tollywood film industry, and if all their films are this fun then I definitely need to delve a little deeper. Tollywood is the Telugu-language film industry of India and home to the largest film studio complex in the world. Westerners usually incorrectly identify all Indian cinema under the umbrella term of Bollywood, but in reality there’s a lot more depth and regional cinema than that. Tollywood has been operating and producing films since the silent era, and my discovery of it through this movie proves to me once again that no matter how much you study and learn about film and film history, there’s always something else to uncover.

Seetharam is played by Chiranjeevi, commonly known as Megastar in his native region. That’s right, they call him Megastar, and after watching this movie it’s clear why. The dude can do it all: singing, dancing, fighting, acting, anything you throw at him he’s got it covered. And not only can he do it, he does it well! Stallone should totally get this dude for Expendables 3! He starred in nearly 150 films, but has since moved on to politics. Just the thought of this jet-ski jumping, horse-sliding badass taking on a Parliament seat has me chuckling, and reminds me of when Arnold Schwarzenegger was California’s governor.

The film’s look is fairly anachronistic, with the distinct color palette of a ’60s or ’70s film mixed liberally with the electronic drum beats of the ’80s and the fashion styles of the ’90s. The mash-up worked well for me, as someone that enjoys all these periods of culture, and the unique mixture definitely added to the enjoyment. For instance, those psychedelic mushrooms might look like a leftover set from the late ’60s, but Megastar’s pant suit featuring a zebra-striped back and a huge watermelon on the front reminds you immediately that this is the 1990s.

Alluda Mazaaka…! is truly an amazing film. It delivers excellent action scenes, hilarious dialogue exchanges, wonderful songs and dances, and a truly interesting and well-written story. There’s enough double-crossing to fill up months of TV soap operas, but Alluda Mazaaka…! blasts it all out over the course of three hours. It can be a little draining keeping up with everything and everyone, but it never stops being funny and the action is so incredibly exciting that I defy any action fan not to be entertained by what this film offers. I loved Alluda Mazaaka…! from start to finish. John Woo always talked about wanting to make a musical, and I think something like this would be right up his alley.

But y’know… this is also a very over-the-top film and really not worthy of the gushing praise. Oh sorry, that was on the tip of your tongue and I just said it for you. 🙂 A little joke for those that have seen the film. And for those that haven’t, get watching…!

Alluda Mazaaka…! was a Reader’s Choice selection from my old partner in crime, Uncle Jasper.

Couldn’t find a trailer, but here’s one of the awesome fights.