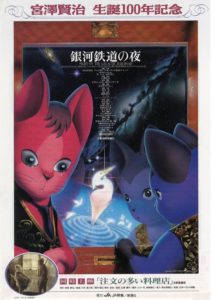 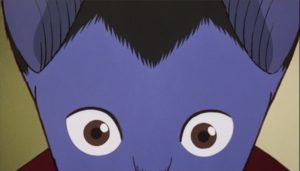 The story follows Giovanni, a young anthropomorphic cat who struggles with teasing at school, some good old-fashioned child labor later, and then taking care of an apparently ill mother while his father is away on an extended fishing trip in the north. It’s a raw deal, but at least his best buddy Campanella’s got his back. Giovanni winds up taking a nap out in the fields and is awoken by a train popping up out of nowhere. He and Campanella take off on the mystery train as it tours the constellations, because of course they’re on the titular Galactic Railroad now. And just like Galaxy Express, they stop once in a while to take in the scenery before hopping back on the train to continue their journey through space.

And just like Spring and Chaos, the pacing is pretty damn sluggish. It takes over half an hour just for them to get on the train, which is the entire point of the film. It was one hell of a relief to finally get the plot going after all that time. I suppose that first chunk is there to flesh out Giovanni’s life and environment, but a lot of it seemed unnecessary. I think of it as meticulous. Every action is deliberate and drawn out. It’s a similar sense to what you get from watching an old Hollywood film that doesn’t cut as quickly as modern films do. It also feels a bit similar to Studio Ghibli films and the way that they pay a lot of attention to minor, everyday activities. But as much as I want to complain about the movie being too slow and plodding, that’s exactly what is necessary to create its mystery-filled mood, and really, the film isn’t so much about the plot as it is about the style. 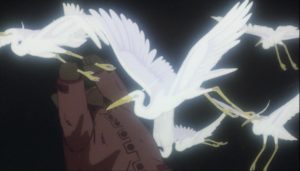 Right away the film sets the tone with the suspenseful music of the opening credits (which are in Esperanto of all things, something I never thought I’d see in an anime). The opening shot is from the air, swinging wildly around at the landscape below. Even the most sluggish parts of the film are filled with a bizarre sense of confusion. Giovanni himself seems to be in a perpetual state of bewilderment, always watching things with a wide-eyed stare. And once he does finally get aboard the train, we are treated to some fantastic otherworldly visuals.

The animation is quite good, but in a way that doesn’t really stand out. It doesn’t call attention to itself, but rather to the imagery on display. That might sound weird since the imagery is portrayed through the animation, but I feel like there’s a distinction here that the film is utilizing. The glint of a searchlight on the water didn’t make me think, “Wow, that was some good animation!” Rather it made me think, “Wow, that was a really cool visual!” It takes a bit of looking to see that the animation is actually pretty fluid and graceful, too. 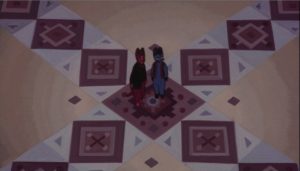 Like Spring and Chaos, the film is somewhat confusing and metaphysical. I found the plot itself a bit predictable, but it’s the symbolism and atmosphere that are the real draws of this film. And it has some rather dark themes for a children’s film. Apparently, the novel was written after the death of Miyazawa’s sister, and writing the book was his coping mechanism to deal with that personal tragedy, so it’s no surprise that the story is filled with overtones of sadness and loss. Rather than intense anguish and despair however, the film is more mellow and contemplative. It is about searching for meaning in the confusion of life, and in that way, its confusing imagery and slow pacing are exactly right for the story it is telling.

In the end, Night on the Galactic Railroad is a great film. I really do wish that first half hour had gone by a lot faster, but aside from that, I really can’t say anything bad about it. It’s beautiful and thoughtful in a unique way, so definitely give it a look if you’re in the mood for some philosophical fair. And who knows, maybe now I’ll finally understand just what the hell was going on in Spring and Chaos if I ever wind up watching that movie again.