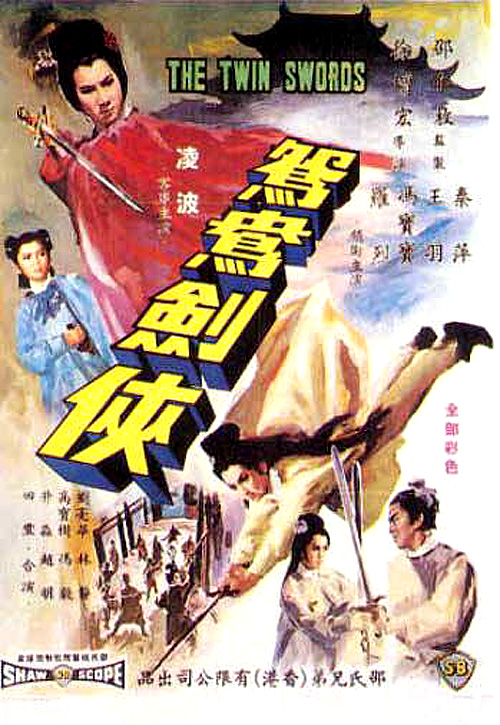 Early on in the film, the Red Lotus leaders do a walk-through of their temple, familiarizing themselves with the new defense setup. As the scene played out, I knew I was going to enjoy the film if the filmmakers delivered on their promises. There isn’t much in my book that can top wily devices and trap doors leading to spiked pits and the new Red Lotus temple has all that and more. Much to my delight, almost the entire film plays out in this location and is basically a continuous series of action, intrigue and kick-ass traps.

The Twin Swords benefits greatly from being a sequel. With all the character’s back stories in place from the prior film, it is literally all gravy in this one. The action was definitely lacking in the Temple of the Red Lotus but The Twin Swords more than makes up for it. The choreography is still rough and nowhere near the heights later Shaw Bros. film would achieve, but it is leaps and bounds better than the previous film. The fights are faster, more plentiful and very imaginative. The fights are still playing second fiddle to everything else in the film though, so don’t expect displays of martial skill to shock your heart into an irregular beat. They are but an element in this wu xia fantasy and are more closely related to the storytelling than later more distinct setpiece fights would become.

Temple of the Red Lotus hinted at the fantastic with the seemingly omnipotent Scarlet Maid character and everyone’s ability to easily jump up to rooftops from the ground, but they turn on the spigot full-force in The Twin Swords. It is quite interesting to see a film from the genre of martial arts fantasy prior to the use of wire work as it creates a few problems for the filmmakers. All the rooftop jumps are filmed in reverse and played backwards (a standard trick) and the scene of the Scarlet Maid descending from her mountaintop home is done with cleverly manufactured miniatures. To my knowledge there was never a lot of miniature use in Shaw films, and as a big fan of them, I welcome their inclusion. It may look slightly ridiculous to some modern viewers, but realistically, how else are they suppose to portray her jumping thousands of feet down a mountain?

My least favorite aspect of the first film was Jimmy Wang Yu’s inept character. Thankfully the filmmakers agreed with me and relegated him to a supporting role in his own movie! The Jin family takes center stage as they venture out of Dragon Valley and into the trap-laden Red Lotus Temple. Petrina Fung Bo Bo may have only been a child but she packs a punch as well, begrudgingly brought along by the grandmother, but ultimately saving the family due to her small stature. Jimmy Wang Yu’s still around too, mostly whining his way through the first half but then genuinely coming into his own later on. They also toned down his multi-hued makeup job from the first film, another change for the positive.

No new characters are introduced really, allowing the focus to remain on the people we know and the action. Scarlet Maid’s foggy mountaintop home is a great new location though and facilitates the introduction of the Phoenix Lute through a couple of songs that help to bridge some of the plot jumps. I could see some people being turned off by the songs, but I found them a welcome addition, giving the film an interesting unique quality that not a lot of martial arts films can pull off well. The lute serves another purpose though, but that will have to wait.

The Twin Swords is a great early Shaw Bros. effort aimed at those looking for a light-hearted fantasy romp. It successfully takes the road map laid out by the overly talkative Temple of the Red Lotus and absolutely runs with it. I greatly enjoyed this one and I look forward to checking out the final film in the trilogy next week, The Sword and the Lute.