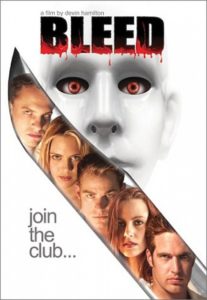 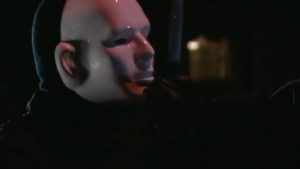 This murder gives way to the introduction of Maddy (Debbie Rochon) and Shawn (Danny Wolske), our main characters. Shawn is the big boss of some unnamed company that does whatever it is they do. Judging from the Full Moon poster art adorning every wall and hallway, perhaps they work at Full Moon! Hopefully this isn’t an autobiographical account of the early 2000s at the indie studio! Anyway, the murdered man was Shawn’s boss, and now Shawn has slid into the spot, hiring Maddy to fill the job he just vacated. They immediately share a mutual attraction, so it doesn’t take them long to become more than just co-workers.

The characters of Bleed are uniformly annoying. In a great horror movie this might lead to fun via rooting for the killer, but in Bleed it’s just irritating. And since it’s from 2002, there’s none of the fun latex craftsmanship to enjoy, nor is the killer an inspiring or scary presence. Maddy stands out from the pack, though, and a good amount of the movie investigates her mental state and her past. I wouldn’t call her a good character, but she’s interesting and I had hopes that she would achieve a noteworthy mental victory by the end of the film. Bleed builds to a climax of this nature, but then in the final act I guess the filmmakers’ ran out of time and just said, “Ahh, fuck it!” Almost everything is thrown out the window in the favor of adding a dumb Gotcha! twist that makes literally no sense.

Speaking of weird logical fails, the characters of Bleed sure do like to loudly and openly discuss alibis and murder! They do it in the office hallway, in the office itself, and even in the backyard as they leisurely sit by the pool. They aren’t even the least bit cautious. It’s ridiculous and it made me laugh every time they did it. Not the desired effect, I’m sure, but in a movie this nondescript, I’ll take what I can get! I had a similar experience with the girl who just stands in the pool while the killer slowly turns an extension cord into a live wire to electrocute her. She had so much time to get out of the pool, but she just stands there sobbing and yelling, “No, don’t do it!” Hahahahaha, she may have pleaded but inside I guess she was ready to go! 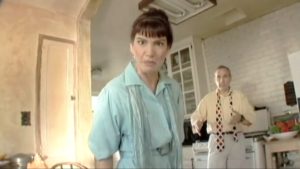 By far the best reason to track down Bleed is to see Troma legend Lloyd Kaufman in his tour de force cameo role as Maddy’s father. Opposite him in the role of Maddy’s mother is scream queen Brinke Stevens, and they play off each other rather well. It was enough to make me consider what their characters’ relationship was like over the years, as Brinke spends the scene yelling and berating Maddy, while Lloyd is in the background just kinda shaking back and forth in shock, his arms held before him and his mouth agape like a quivering Uncle Lloydie blow-up doll. The scene goes on for a while, too, and every time they cut back to Brinke and Lloyd he’s just doing the same thing; it’s hilarious!

Unfortunately, these are but small moments over the course of an 80-minute film. Bleed shows a lot of potential in its story, but the writers chickened out and opted for an ending that comes out of nowhere and respects virtually nothing that came before it. There are better Full Moon movies to waste your time with, although Bleed definitely isn’t as bad as they come.

Next time I get around to a Full Moon movie I’ll be watching the movie I said I’d be watching this time but couldn’t because I didn’t get it in time: the 1999 Moonbeam film, The Boy with the X-Ray Eyes! See ya then!