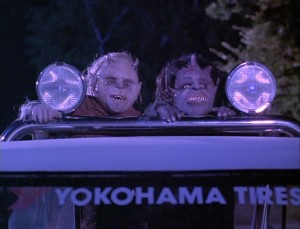 What’s interesting about Ghoulies IV is that instead of the in-name-only sequel I expected, it actually tries to be a direct sequel to the original film (something neither of the previous sequels attempted). Peter Liapis returns as the main character from Ghoulies, Jonathan Graves, but he’s a completely different person than what is shown in the older film. Jonathan has left his days of amateur black magic behind him — or so he thinks! — and now spends his days as a cop who plays by his own rules, summoning nothing but justice!

But you can’t touch the darkness of the beyond and not be affected by it, so apparently when Jonathan did his Ghoulie summoning in the first film, it resulted in an evil version of himself named Faust that lives in the spirit world (or wherever it is that the Ghoulies live when they aren’t having fun over here). Does that make sense? Sure! It’s a movie! Anyway, much of the movie centers around a red jewel in Jonathan’s possession, needed by Faust’s servant Alexandra (Stacie Randall) in order to bring the Dark Lord into the real world. This will also banish Jonathan to Ghoulieland in the process. Oh no! What’s funny about this is that Alexandra had a jewel of her own in the first scene of the film, but she stepped into the summoning pentagram — which is apparently a big no no, who knew? — and dropped the jewel into the depths of Ghoulieland. 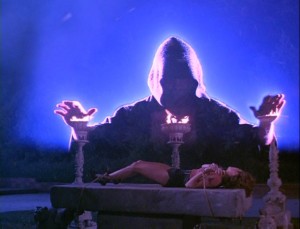 As I mentioned before, what makes Ghoulies IV so entertaining is that director Jim Wynorski packs the film full of all kinds of crazy, only-in-a-B-Movie kind of stuff. And because it’s Jim Wynorski, low-budget filmmaker extraordinaire, and not some average yahoo with a few thousand dollars, Ghoulies IV is a really fun, little romp of a movie. Have you ever considered what a John Woo-style gun battle would look like in a B-Movie? Wonder no more as our hero cop Jonathan takes up a pair of guns against a crazed burglar with a shotgun! In a convenience store, no less! No display of chips or cereal will survive! Have you ever wondered if a random low-budget actor could pull of a good Art Carney impression? Wonder no more! Or perhaps you’re just looking for another movie to add to your “Movies with lasers shooting out of people’s hands” Letterboxd list? Let me introduce you to Ghoulies IV! It’s got all this, and a whole lot more.

Before I wrap up, I have to talk about the changes made to the Ghoulies. What I realized very early on in Ghoulies IV is that the little guys in the monster masks were never intended to be playing our little animal-themed buddies from the first three films. Instead, they are simply another couple of dudes from Ghoulieland that happen to look like Hobbit-sized Orcs, no more, no less. Are they as charming and endearing? Not even close, but I’d take these little guys over the talking versions of Snake Fetus and his buddies as seen in Ghoulies III. So all my fear and frustration that the Ghoulies weren’t puppets was all for naught. Proof that you can’t always judge something by your first impression.

Ghoulies IV isn’t a great film — it’s not even good — but it is damn entertaining thanks to the nearly non-stop B-Movie thrills. Put on the sorcery robe in the back of your closet and have a blast!

Next time I get around to a Full Moon movie, I’ll be going with David DeCoteau’s 1998 film Shrieker! See ya then!