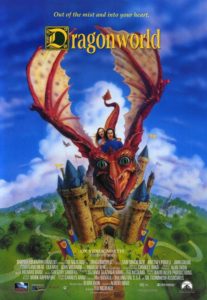 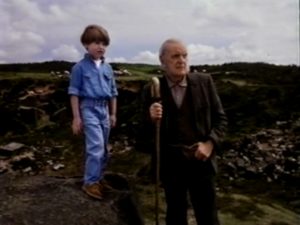 These early days in John’s life make for quite a charming little movie — with one of Richard Band’s most evocative scores — and it really captured my heart. Unfortunately, like my own childhood, I knew this innocence wouldn’t last. The film flashes 15 years into the future and now John (Alastair Mackenzie) is a 20-year-old Scotsman who plays the bagpipes like a master and shows no indication that he was born in the US. With the change, the youthful, magical charm fades away, and we’re left with a film that’s a version of the classic King Kong story with a dragon as the central creature.

The story also has some logical oddities that took me out of the movie. When the film begins, the McGowan clan has some past due tax bills that arrive marked FINAL NOTICE. Later, when John is an adult, these same bills sit around. Am I to believe that they’ve somehow just pushed these bills to the other side of the desk for the last 15 years? I’m not sure that’s how taxes work. Also, when the adult John sees headphones he freaks out like he’s from the 1600s and someone just performed magic before his eyes. They show that it’s 1993 when he’s an adult, so it must have been 1978 when he was five. Headphones were definitely a thing back then, and maybe he had never seen them, but even at five he wouldn’t have been completely oblivious to electronic technology. Whatever… it’s a family fantasy film where a kid summons a dragon from the fairy lands with a bagpipe tune, so who am I to complain about these problems of real-world logic! 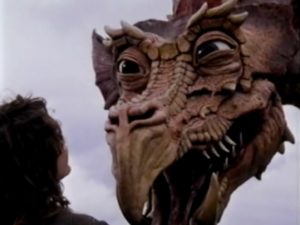 The dragon is realized through a barrage of various FX techniques, and for my money it was all done very well considering the low-budget nature of Full Moon productions. They built a giant animatronic head that takes most of the shots, but there’s also quite a bit of stop-motion for the wider shots, and even what looks like some early CG for the more intensely ambitious moments. I wouldn’t say that the FX are especially good, but they are definitely enough to sell the fantasy to the young and the less-critical members if the audience.

At the end of the day, Dragonworld is a fun film that I’m sure will play better for younger kids than anyone else. I had a good time with it, and I’m sure anyone open-minded enough to watch low-budget stuff on a regular basis will enjoy it as well.

Next time I get around to a Full Moon movie I’ll be watching something called Dead & Rotting! See ya then!