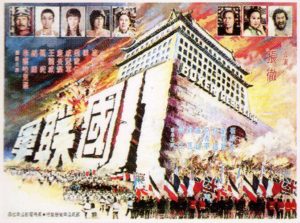 Many Chinese-language films tell stories of the Chinese people fighting off foreign invaders, but Boxer Rebellion tells an interesting and unique one. The film depicts the uprising of the boxers, a movement where hundreds of thousands of nationalistic Chinese people wished to expel all foreigners and end their influence on the country. The power of the Qing dynasty was failing and the influence of foreign powers seeped more and more into Chinese culture, so the everyday people of China decided to “take back their country.” They were emboldened by the practices of the spiritual boxers who made them believe that through their spells they could become invulnerable to all weapons, including the foreigners’ guns. Of course, this is impossible, but the power of belief is strong, and these people were in such a desperate situation that they latched onto whatever line of hope was available. In response to this, the Eight-Nation Alliance was formed between Japan, Russia, England, France, Germany, the United States, Italy and Austria-Hungary.

I feel like the common understanding of Chang Cheh is misguided, in that he’s known more for his use of blood and violence than his actual skill as a director. Boxer Rebellion shows both exceptionally well, but it is the film’s quality as a nuanced work that makes it stand out as one of Chang’s best. The depiction of the three main Chinese factions and their interplay is subtle and thought-provoking. The Empress Dowager is out of touch, with her court’s strict adherence to protocol and tradition in the face of strife and chaos throughout the country. The boxers are patriotic to the point of blindness, seeing what they want to see in terms of their own abilities or the actions of others. The heart of the film comes via the last group: three sworn brothers (Chi Kuan-Chun, Alexander Fu Sheng and Leung Kar-Yan) who fall in with the boxer movement, but quickly realize that it isn’t all it’s made out to be. These characters are also a microcosm of the three factions, with one man patriotic to a fault, another good-natured but selfish, and the third who truly has the best interest of the country and its people in his heart. Chang handles all of this with absolute confidence and skill, and the idea that his refined artistic vision sat unseen for a solid 30 years is sad to say the least.

The action of Boxer Rebellion is unique, just like the movie itself. Lau Kar-Leung is the sole choreographer credited, and in addition to his high-quality hand-to-hand work, we are also treated to a lot of weapon work. An early battle when the boxers attack a Japanese encampment stands out because of the prominent machine gun and the destruction it causes. Later battles lean more towards single combat, but our heroes are often armed with a variety of weapons (tridents, swords, bayonets and the enemy’s own guns, among others). A demonstration before the Empress Dowager is a wonderful display of ability, especially on the part of Chi Kuan-Chun. His extended demo of Snake fist and other styles is so superb that when Fu Sheng steps out to follow it up, he bears a look of trepidation. But of course, he needn’t have worried; his display is also stunning.

From the sprawling scale to Chang’s refined and nuanced storytelling, Boxer Rebellion is one of Chang Cheh’s finest achievements. It’s definitely not as fun or entertaining as a lot of his movies, but that’s not the point here. Boxer Rebellion delivers a compelling look back into Chinese history during the waning years of the Qing dynasty. Chi Kuan-Chun and Fu Sheng give top-shelf performances as our leads, and the production itself is on another level compared to other, lower-budget Shaw productions. For anyone interested in world cinema, Chang Cheh, or Chinese history, Boxer Rebellion is a riveting, one-of-a-kind movie from the Shaw studio.

Next up in this chronological journey through the Shaw Brothers Martial Arts is Sun Chung’s The Drug Connection! Don’t know how much martial arts is in it, but I guess we’ll find out. See ya then!