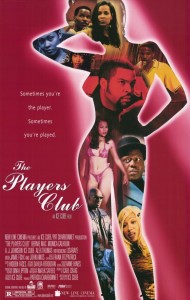 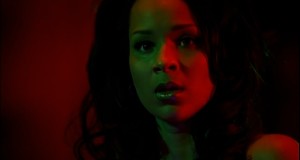 And if you’re not from this select audience, you’re not necessarily going to respond to the material in the same manner. There’s always going to be an “outsider looking in” mentality, something lost in the translation. And that’s when it hit me: films produced for a predominantly black audience should be viewed by non-black audiences as foreign films, as a window to the entertainment of another culture. This might sound strange, but I mean nothing negative by that. I’ve long wondered why mainstream critics (and some bloggers) hate on these “urban” movies so harshly, why Tyler Perry’s newest film always receives scathing criticism and is the brunt of many jokes. It’s the same reason why non-fantasy fans think The Hobbit is dumb; it’s not for them.

And Ice Cube’s début as a writer/director is firmly in the “not for them” camp. The movie loosely follows a traditional narrative structure as it charts the journey of Diamond, a dancer at The Players Club trying to put herself through college. It simultaneously tells the story of the weaselly club owner and his troubles with a local gangster. Not to mention a few other sub-plots thrown in to spice up the dramatic bouillabaisse. It’s definitely not high art, but it never aspires to be. It only hopes to be entertaining melodrama, showing the perils of working a high-risk job like stripping, and how one girl might rise above it. 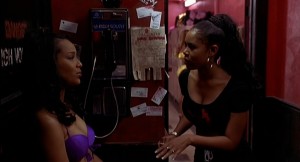 And I must consider these facts when watching and reviewing and rating the film; it wouldn’t be fair to do it any other way. But let’s be clear: I don’t want to assign The Players Club a good rating based on some bullshit, affirmative action rating bias. I’m only seeking to shine a little light on a subject that I find woefully underrepresented in the blog-o-sphere. Oh God, I just said blog-o-sphere…

That all being said, I really enjoyed The Players Club. It has some pacing issues and its somewhat episodic nature makes it feel longer than it is, but its narrative pays off rather well and it succeeds in delivering one of the best revenge-driven beat-downs I’ve ever seen. I can only imagine the ruckus the scene caused in the theater. Ain’t nothin’ like a good, vengeful beat-down.

Ice Cube is also competent behind the camera, shooting the film well, if rather obviously. I was especially impressed by the opening 10 minutes or so, which sets up our main character, the story and her workplace (and the setting for most of the movie) in one fell swoop. The first shot of the club’s interior is great too, focusing on Diamond’s face as she enters the main room, and then spinning around 360 degrees to capture the entire club before resting again on Diamond’s frightened face. It’s a great shot, and easily my favorite of the film. 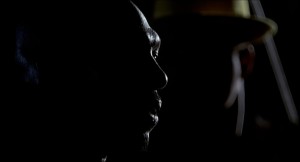 The Players Club is definitely not for everyone, as it’s quite vulgar and it throws out a seemingly non-stop barrage of profanity. The violence is also quite brutal, but oddly enough for a movie about strippers there’s not a gratuitous amount of nudity. Ice Cube shows real restraint here, as it quickly could have devolved into something of a late-night softcore film. Instead, Cube focuses almost solely on the drama, and while some might not like the melodramatic plot, I enjoyed it. Is it anything new? Not particularly, but it works well and it’s fun to watch.

And why is it so fun to watch? Because the entire cast is dope! Filled with tons of recognizable people (most likely because Ice Cube was directing), literally everyone puts in a stellar performance. LisaRaye is top-notch as Diamond, and Jamie Foxx is excellent in a supporting role as the club’s DJ. The characters are also fairly deep and well-drawn, allowing the actors to truly inhabit their characters and bring them to life. This gives The Players Club a rich, vibrant quality as it moves through its varied tones and many sub-plots.

So don’t let the bullshit 31% Rotten Tomato Meter fool you, this one is quite entertaining. It definitely feels like a movie that most white people would cast aside without a second thought, but careful viewers will definitely find something to dive into. I hate to break it down like that, but hey, this ain’t that idyllic post-racial world we’ve heard so much about.