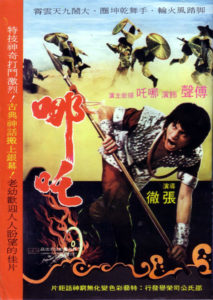 Na Cha (Alexander Fu Sheng) is a rambunctious 20-something who can’t sit still for his Taoist lessons. He wishes instead to wander the countryside having fun, but Auguang of the East Sea has other plans. The character of Na Cha is traditional portrayed as a child (where this kind of temperament makes more sense), so accepting Fu Sheng in this immature role is one of the film’s biggest stumbling blocks. Fu Sheng gives a typically charismatic performance — I think it’s impossible for me to not like Fu Sheng — but it’s one of those cases where a younger actor or an unknown might have worked to the film’s greater benefit. But given the talents of those involved, I’d have rolled the dice on a Fu Sheng-starring Na Cha film, too.

Fu Sheng’s casting makes more sense considering Chang Cheh is telling the character’s “origin” story with Na Cha the Great, illustrating how Na Cha ascended from humanity to the level of a god. The idea that Na Cha begins life as a human contradicts Na Cha and the Seven Devils, as well as what my research on Investiture of the Gods tells me. But Na Cha the Great plays loosely with this foundation, also referencing the character’s mother carrying Na Cha in her womb for 42 months. That’s not exactly normal human behavior, now is it? In any case, he begins the film as a bored, sheltered student without much of an idea of the struggle of every day life for the common people. Then, over the course of the film, Chang slowly details how Na Cha transitioned into the fire-wheel ridin’, fire-spear wieldin’ deity that he is in more traditional incarnations of the character.

As muddled and unexplained as the film’s narrative is overall (perhaps in part because Na Cha’s story is supposed to be one of the most well-known folk tales in China), Na Cha the Great is still a Chang Cheh film starring Fu Sheng, with choreography by Lau Kar-Leung and Tang Chia; even the worst film with this pedigree is going to be worthwhile. The film is not bursting with action, but when Na Cha does battle it is highly enjoyable. The fights are primarily weapon-based (spears, tridents, and a sword or two), something unique in this era of the Shaw catalog. And since Lau and Tang are well-known masters of their craft, the fights, however brief, are truly great and elevate the film considerably. The addition of fantasy elements endears the action to me even more, since many of these fights occur in the clouds. We are also treated to the pure bliss that is Fu Sheng repeatedly punching a dragon in the face.

Na Cha the Great is not all that it could have been, but it remains enjoyable and worthwhile for fans of Fu Sheng and Shaw Brothers FX fantasies. Keep your eyes peeled for a little “Wow, he’s so young!” cameo from future superstar Eric Tsang, too!

Next up in this chronological journey through the Shaw Brothers Martial Arts catalog is Kuei Chih-Hung’s The Tea House, starring Chen Kuan-Tai! I’ve wanted to see that one for so long! See ya then!