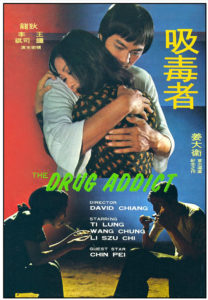 I’m going to assume that David Chiang had a fair amount of freedom in picking the film he wanted to make as his debut, and if so then The Drug Addict is an interesting and bold choice. In a way, the film is a continuation/cousin of Chang Cheh’s series of films that dealt with modern-day social issues affecting the youth of Hong Kong. Chiang could’ve easily knocked out a straight martial arts film with the help of the amazing Shaw studio craftsmen, but instead he chose a drama that features only limited fighting. This is a much harder proposition, so I have to give my respect to Chiang for attempting a film built on emotions and relationships instead of revenge or the like. The fact that he was mostly successful in crafting an entertaining film and interesting (albeit shallow) look at addiction is really impressive.

Now, I say that the addiction stuff is shallow, but like many great films, it offers its most salient points beneath the surface and within the character arcs. The film works completely at face value, but careful thought reveals a lot more. The film was written by the wonderful Ni Kuang after all, so some level of thematic sophistication is to be expected. The lead characters, Kuan and Tseng, are similar in that each man is fighting an internal struggle. Kuan’s is one of addiction, a disease that can never be cured, only controlled and managed. It is something he was born with, and must learn to live with.

Tseng, on the other hand, is fighting against the values and ideals instilled in him during his upbringing. Tseng was one of many orphans taken in by the film’s villain, the leader of the drug syndicate (Lo Dik), and raised to be an infallibly loyal member of the criminal organization. This kind of indoctrination that begins before your first memory is something that you can’t simply turn off, so within this struggle you can understand why Tseng felt pity for Kuan and boldly made the move to help him. This, in turn, delivers the moral of the film, that these kind of deep-seated, incurable human struggles are best handled with the support of others. Neither man can succeed without the others’ help, and this theme runs to great effect right through to the final moments of the film.

The martial arts are very limited in The Drug Addict, but they are also of a fairly high quality. Choreographed by the terrific trio of Lau Kar-Wing, Chan Chuen, and Huang Pei-Chih, the battles are intense and the stakes are high. The fights are mostly reserved for the finale, but there are flashes of Ti Lung’s skill throughout the film. This might be disappointing if you come into the film expecting a traditional action film, but in terms of drama, these bits only entice and whet our appetites for the inevitable release of the film’s built-up, pulsing tension. The finale is a wonderful, cathartic release, and a great cap to the film.

The Drug Addict is definitely not going to satisfy or work for everyone, though. There are dramatic moments that are a little too unintentionally funny (such as Ti Lung beating himself with a folding chair in slo-mo), so there is a slight hill of disbelief to climb for any viewer. Ti Lung and Wong Chung have great chemistry, though, and their friendship feels genuine and heartfelt. Some of the script’s themes could have been enhanced a bit through visual and directorial choices, but overall Chiang does a great job for a newcomer. The film’s score is excellent as well, featuring a rumbling, menacing theme to represent the characters’ drug use.

The Drug Addict is a somewhat slowly paced, but it is deliberate and the film remains a rewarding watch for those interested in addiction/recovery topics.

Next up in this chronological journey through the Shaw Brothers Martial Arts catalog is writer/director Wong Fung’s Rivals of Kung Fu! See ya then!