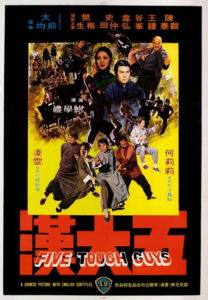 This little history lesson does not come courtesy of the film, though, as the narrative is told in a rather broken manner that leaves a lot to be desired. I wouldn’t even know it was based on history if I didn’t do some digging! A re-watch might help now that I have some foundational knowledge, but a poorly told story is still a poorly told story. In any case, the five tough guys of the title are the men entrusted with transporting General Tsai and keeping him safe. They are all masters of the martial arts, a skill far less valued in this era of guns and advanced weaponry, and they stand virtually no chance of success against the well-armed government that also has far more men at their disposal. But what is a rebellion that’s not outmanned and outgunned?

This is a pretty dope setup, and in the hands of Chang Cheh or another capable director, it could have been magnificent. Unfortunately, the majority of the characters aren’t especially well-defined. This cripples the film and robs it of the emotional engagement the situations should have. For instance, Chen Kuan-Tai plays Wu Wen-Yuan and I think all we ever learn about him is that he’s rich and a skilled martial artist. The group also includes a master who has taken to street performing (Shut Chung-Tin), some kind of local political official (Wai Wang), and a dude they pick up along the way (Wong Chung). This is honestly about all I know or remember about these characters.

The fifth member of the group, Wei Jin-Bao (Fan Mei-Sheng), fares a little better. Wei is the son of Eight Arm Na Zha (Yeung Chi-Hing), a respected master who once ran a very successful and well-known security bureau. Those days are long past, but Wei romanticizes the era and continues honing his skills (to the delight of the town’s youngsters). He is overjoyed at the mere thought of flying his family’s flag on a security wagon once again. I loved Wei Jin-Bao and his affection for the past, so even when the character’s arc just kind of stagnates, his foundation was enough for me to overlook the film’s larger issues.

I should also add that Chief Hung, Ku Feng’s character, is a fine adversary for our heroes to go up against (even if he doesn’t actually do that much). But my research into the history behind the film revealed his role to be even more interesting. When Hung is first introduced, he mentions that the President (AKA General Yuan Shikai) is very pleased with him for carrying out the assassination of Song Jiao Ren. This assassination actually occurred, and although Yuan was thought to be behind the murder of his political opponent, it could never be proven. I don’t know if Chief Hung is based on a specific person or if he’s a complete fabrication, but regardless it’s a great little detail that enhances the film.

Researching the film made me appreciate and understand Five Tough Guys far more than I did while watching it. It really could have been a home run of a movie with this ripe backstory of political intrigue, but at least what remains is still fairly entertaining if you can overlook the faults. There are a lot of fights to keep things active, and while they aren’t top-notch quality (in terms of editing and direction, specifically), the choreography is good enough to make you forget about your problems for a few minutes. Lily Ho also has a small role at the beginning of the film, and the final fight features the five tough guys joining forces against Japanese Judo master Omae Hitoshi. So… it could definitely be worse!

Next up in this chronological journey through the Shaw Brothers Martial Arts catalog, I’m doing a very popular, non-martial arts Cheng Kang film: Kidnap! See ya then!