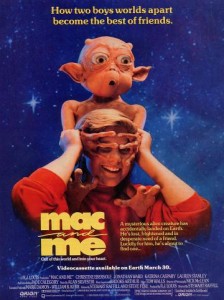 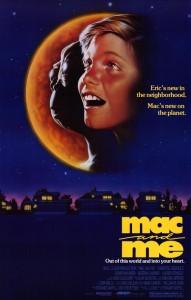 To make a long story short, an American space probe lands on the surface of Mac’s planet and the desert-dwelling creatures approach it like the monolith of 2001: A Space Odyssey. The probe is one of those rock collector units equipped with claws and a vacuum to take samples and return them to the NASA scientists waiting patiently on Earth. One thing leads to another and Mac & his family get sucked inside for the ride of their lives!

Mac and Me is hands down one of the most flagrantly bad movies I’ve seen in a while. Its script is awful, eschewing a traditional plot for the most of the second half. It actually reminded me of Troll 2 in certain ways (mostly the general feeling of exhaustion watching the film in one sitting brought on), but I hesitate to even mention that film for fear of being misunderstood that I think they are on similar levels. Mac and Me is considerably better in terms of visual fidelity of the special effects, the acting and the cinematography. The opening half of Mac and Me (let’s say up until the kid in the wheelchair goes off the cliff) is fairly respectable for a moderate-budget family film, but the second half delves deep into the reckless style of storytelling that characterizes every moment of Troll 2. What’s important to remember though is that Mac and Me, like Troll 2, is so much fuckin’ fun that virtually every shortcoming pays huge dividends to those who watch bad movies in hopes that they turn the corner and become good. Mac and Me is firmly in that camp, and although there is a lot of 80s nostalgia working its magic on me in the film, I think most B-movie aficionados would have an equally enjoyable time with this one.

Director Stewart Raffill actually does a good job here. Whachoo talking about, Willis? Yeah, I said his directing was good. Perhaps the poor acting of the kids is a result of his inability to tell actors what he wants, but his ability to create an interesting visual composition is much better than I would’ve expected. It’s easy to watch something purty like Close Encounters of the Third Kind and call Spielberg a good director, but I think it takes a much more careful eye to see that a movie like Mac and Me is perfectly directed for the type of film it is. Never before has an alien baby driving a Power Wheels down a residential street with a pack of dogs chasing him looked as gorgeous as this. I would never go so far as to say that Raffill is a good director, but he is definitely one that understands the camera and what he’s trying to achieve, something I can’t say for most truly bad films.

Raffill also adds some incredibly touching and heart-wrenching moments to the film that counterpoint the hijinks perfectly. These come whenever Mac communicates with his family members who are hoofing it through the Mojave desert trying to find him. The aliens all put their hands up and whistle while Alan Silvestri’s music swells and the cinematography expertly captures the tortured moment using shallow depth of field to heighten the feeling of isolation. Later in the film the scene repeats, but this time Mac stares plaintively at the freeway while his mother and sister lay dying on the desert floor and Big Mac futilely digs into the ground for water. The pain in their saddened, surprised eyes cuts right through any species barrier we might have. 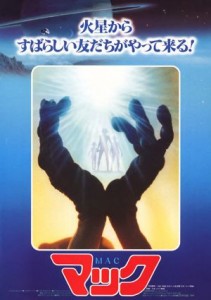 The special FX of the film are also surprisingly good compared to my expectations. Most of the shots are achieved through full-body suits or puppets and for the most part they work well. The alien’s faces are especially emotive, perfectly communicating the surprise they feel in every new experience the film offers them. OK, so maybe the alien’s facial design isn’t that great (and I have a feeling the shape of their mouths came from the think tank at Coca Cola), but the actual FX work is pretty good regardless. The parts when Mac is sucked into a vacuum (yes, this happens more than once) were really incredible, and that’s no bullshit. It honestly looks great and I have no idea how they achieved it.

And let’s not forget our sponsors! Mac and Me is pretty much only a movie because of something called The Mac and Me Joint Venture. If it wasn’t already apparent that there was a hidden capitalist agenda throughout the film, the copyright statement betrays any social commentary or artistic merit you might have thought you detected while Big Mac robbed the supermarket for the Coke HE NEEDS TO SURVIVE. And don’t forget when Coke literally saves Mac’s family as they lay dying in an abandoned mineshaft. (Reminder to self: buy Coke for emergency kit.) I recently read a satiric novel by Max Barry called Syrup. In the book, the characters are tasked with creating a film that exists purely as a ninety-minute commercial for Coca Cola. I couldn’t help but think that perhaps Barry is a huge Mac and Me fan, and that maybe this is where Mac and Me went wrong. By broadening their scope to so many investors that must be represented, it diluted the film’s power and its message to unfulfilling levels for most viewers. If only Mac and Me had stuck to one or two products it could have started a whole new sub-genre of film, and we could’ve had an entire series with these intergalactic fuckers.

Ah who am I kidding, Hollywood films are so laden with product placement these days that they’re all a little bit of Mac and Me, but at least Mac had the cojones to be proud of his corporate affiliations and shamelessly suck down Coke after Coke as he danced on a McDonald’s counter in a bear suit on his way to a Wickes Furniture store that he read about in The Daily News. It might be blatant, but that’s better than insidious and subliminal in my book. Despite being a simple rip-off of E.T., Mac and Me is a singular experience that truly must be seen to be believed. It’s far from the worst movie ever made, although it may very well be the most shameless. It’s pure gold though and one can only hope that Criterion will pick up the film and give it the Blu-ray retrospective edition that it truly deserves.