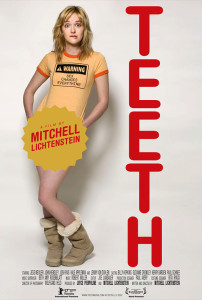 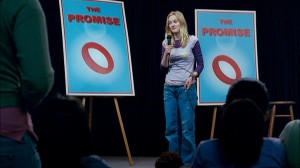 I’m sure the horror hooks and the promise of gore definitely got a lot of people to watch this, but the film could play almost as well without any of its supernatural elements. I don’t know that I’d call this a feminist film, but it definitely seeks to empower women and turn the usual horror formula on its head. The script skillfully weaves mythology and metaphor together, so the film is as much about Dawn’s coming of age and dawning sexuality as it is about her toothed vagina. Dawn is not presented as a horror movie monster that needs slaying, she is merely a teenage girl struggling to understand her body. She is both the victim and the supernatural monster, which isn’t actually the monster of the film. That role is reserved for the various men she comes in contact with who desire her. This is what really surprised me about Teeth; I never would have guessed how respectful and thought-provoking it would be. 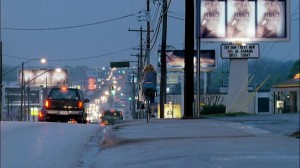 Teeth is also darkly funny, which slowly becomes apparent as the film moves along into more and more audacious material. It’s always somewhat subtle as well, so there is a chance that people have watched this film and taken the whole thing seriously. This is their loss, though, as Teeth presents some truly hilarious moments wrapped in pain, fear and sadness. The film gets only gets better and funnier as it rolls on, with a creepy, confrontational climax that satisfies on multiple levels.

The FX work is limited to the bare minimum necessary to tell the story, but what’s here is exceptionally well-realized. Severed penises and bleeding stumps aren’t the normal mainstream fare, but Teeth shows it all in stunning — and often hilarious — detail. I squirmed, I groaned, I yelled in pain; I can’t even imagine what it was like for the actors who had to wear the prosthetics. A surreal moment in their lives, I’m sure. In any case, despite heading into near-Troma levels of penile trauma, Teeth never seems trashy with its gore. You could easily cut a version of this film without any of the gore and it would arguably be just as effective on a storytelling level. But without the gore, it would be lacking that extra little oomph that it definitely needs to make it memorable. 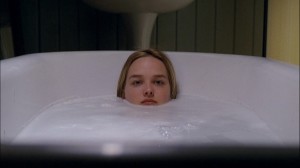 Some of the cast’s acting seems a little stiff at times, but Jess Weixler is great and very likable. She navigates the emotional road of her character well, believably traversing her path to understanding and sexual awakening. My only real complaint with Teeth is that the music oftentimes feels out of place and incongruent with the scene it is placed in. This would usually be a big sticking point with me, but Teeth is enjoyable and interesting enough for me to largely ignore this flaw.

I’ve always enjoyed seeing dickhead men getting their just deserts, and Teeth filled that bill nicely. If you’re looking for a very different take on the coming-of-age story, and you’re not too squeamish, definitely consider giving Teeth a look.