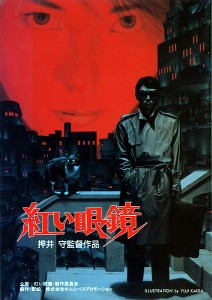 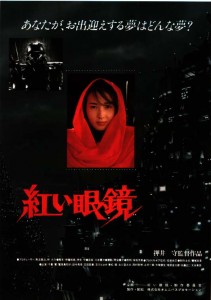 Unfortunately, from there on out it’s all campy absurdity and one of the weirdest spy dramas I’ve ever seen. I was left feeling somewhat misled by that first action scene, but more so I think it was Jin-Roh, the final film of the series, that misled me. I came from Jin-Roh expecting this series to be full of action and the moral grey areas of a police force fighting terrorism with despotic brutality. While the first two films touch upon those themes, I’m left with the realization that Jin-Roh is the odd one out, and very unlike the others. Try as I might, I simply could not get rid of my expectations for this film, and that left me with a dissatisfaction that Red Spectacles doesn’t wholly deserve.

I use the word “wholly” for a reason. The film is very strange, and not truly the spy thriller it sells itself as. After the opening shootout, which is a vastly different version of Koichi leaving his teammates than what was in Stray Dog, the film turns black and white and zips ahead to Koichi returning to Japan to find his old comrades. The dates in this film also do not match up at all with the dates in Stray Dog, so it seems that Oshii decided to rewrite history after making this movie.

Along his journey, Koichi is being tracked down by a government spy. He has a name, but since I called the guy from Stray Dog “White Spy,” I’ll just refer to this guy as “Black Spy.” Sounds like a spy thriller so far, right? However, the massive supply of wacky humor overrides that premise. Just try not to laugh when Koichi, suffering from a bad bowl of ramen, staggers from an out-of-order bathroom stall, to an occupied stall, to finally a urinal with fish swimming around in it. There’s also the very surreal nature of the story. As Koichi gets captured and escapes again and again, you begin to realize that amid his multiple times being knocked unconscious a large portion of the story has been a dream sequence, and you are left figuring out how much of the film has been a hallucination. The intellectual cohesiveness of a spy story is far from what this film delivers.

I’ve seen films that delve into a character’s psyche in this way, and I’ve seen this kind of campy slapstick comedy before, too. But never have I seen the two melded together in quite this way. It makes for one of the most bizarre movie experiences out there, and you’re never sure which way the film is going to jump. Black Spy mostly shows up spouting cryptic warnings and interrogation questions. So when Koichi runs away in his latest escape and bumps into Black Spy in a dark alley you are completely unprepared for the dance routine that Black Spy gives before fading into the shadows. these moments of utter absurdity crop up frequently over the course of the film, and yet the overall tone feels dark and sinister, not just a satire of the dystopian future genre. If that ominous tone and setting were meant to be some kind of sarcasm, then it’s a kind that was completely lost in translation. 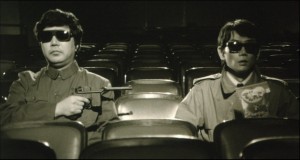 I still don’t know quite what Oshii was trying to do in this film, and distinguishing between the comedic illogic and the surrealistic illogic is enough to make your head spin, but there are other layers to the oddity as well. One of those was heavily impacted by my viewing of Stray Dog, where Inui spent the entire film dragging around a huge luggage case that turns out to have his armor inside. Koichi also spends the entire film dragging around a suitcase, and the whole film built up a tension for me while I waited for him to pop it open. I was hoping for a grand finale with the film turning back into color as he dons the armor and tears up the bad guys in a scene to rival the opening action sequence. Sadly, while we do get to see that armor one more time at the end, it is not in any action scenes like I wanted, and I still don’t quite understand what was going on with that suitcase.

Another head-scratcher of the film is its constant images of a pretty woman plastered all over the place. From the moment the movie turns black and white, we are bombarded with the exact same poster covering nearly every available surface in the film. We finally get to meet her at the end of the story, but I never could figure out who she was supposed to be or what she was supposed to be doing. So let’s add her to the pile of confusing things in this movie.

I really don’t know what to make of Red Spectacles, and despite my disappointment with it, that was largely because of my flawed expectations. I can’t really call this a bad movie, but it certainly isn’t going to be good for most people. It’s going to take a particular appreciation for the abnormal to get any enjoyment from this film. I actually love weird. And this goes beyond weird. It is bizarre. Not the most bizarre movie I’ve ever seen, but certainly in the top ten. Maybe I’ll be able to get more out of it if I watch it again some day. I’m sure I will eventually. This film is far too strange for me to leave alone forever.