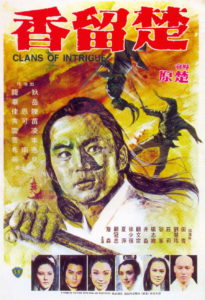 Through the film, Chu tracks clues from person to person, leading him deeper into the web surrounding the Magic Water murders. It’s extremely well-paced; each scene is dynamic and engaging, while continually moving the plot forward with exciting twists — lots and lots of twists! Honestly, the plot doesn’t stop twisting until the end of the film, and it’s dynamite. The film’s Chinese title is simply the main character’s name, but like Killer Clans and The Magic Blade, Clans of Intrigue was based on Gu Long novel. In this case, Fragrance in the Sea of Blood (血海飄香), the first of eight stories that Gu wrote about the character Chu Liu Hsiang. Surprisingly, only one other Chor Yuen film is adapted from this lengthy series, 1978’s Legend of the Bat. Chor also revisited the character in Perils of the Sentimental Swordsman, but that film is actually adapted from a different novel series that Chor dropped Chu Liu Hsiang into. Anyway, the story of Clans of Intrigue is one of its greatest assets, and it makes me pine for the novel to be available in English!

Clans of Intrigue continues Chor Yuen’s excellent depiction of the martial world, imbuing the entire film with a martial energy that hints at the raw power and skill held by all the players. When there isn’t action on-screen, this tension brews just under the surface; when it breaks free, even in the briefest exchanges, choreographers Huang Pei-Chih and Tang Chia deliver electric results. Like Chor’s other films, the fights are tightly edited to bring more fantasy elements in, although here it’s never to the degree of something like The Web of Death. The action felt like a middle ground between that film and The Magic Blade, incorporating the best of both worlds to create fun back-and-forth exchanges both realistic and fantastical all at once. I also loved how the film delivered both weapon-based and hand-to-hand fights interchangeably, keeping me on my toes and always thoroughly entertained.

If I were to rank Chor’s films, I’d place this one just below the current champion: The Magic Blade. To be honest, my only real complaint against Clans of Intrigue is the feeling that it wasn’t quite as great as The Magic Blade. I understand how personal and objective this is as a criticism, but it was literally the only thing that kept me from ranking the film a full four stars. Clans of Intrigue is a stunning film that delivers thrilling action alongside a wonderfully twisting mystery. Highly recommended to fans of wuxia and mystery, and honestly this would probably be a great movie to introduce your non-wuxia friends to the genre.

Now begins my wait for Celestial to release the film in HD. It is such a sumptuous film filled with exquisite production design and costuming, and to be only available in DVD quality is an affront to film fans around the world.

Next up in this chronological journey through the Shaw Brothers Martial Arts catalog is Pao Hsueh-Li’s modern-day thriller Deadly Angels! See ya then!