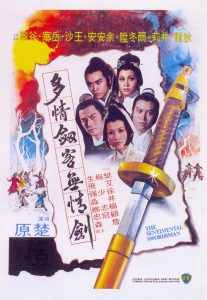 The Sentimental Swordsman is an adaptation of Gu Long’s 1968 novel Sentimental Swordsman, Ruthless Sword (多情劍客無情劍, Duoqing Jianke Wuqing Jian), and the two works share the same Chinese title. The novel is the first book in Gu’s Little Li Flying Dagger series — which also contains the source material for Pursuit of Vengeance and The Magic Blade. This film only attempts to adapt part of the story, with Chor’s 1981 sequel Return of the Sentimental Swordsman covering the rest. The Sentimental Swordsman is so well-written that you’d never know it was a whittled-down version of a longer tale, though, perhaps because Chor wrote it with the knowledge that he would later cover the other elements. The four-year gap between films makes this a little implausible given the amount of films Chor Yuen was making per year, but if anyone could spin that many plates at once I’d bet on Chor Yuen. If we assume Chor did write the film with an intended sequel in mind, then we can compare it to Chang Cheh’s Brave Archer films which were similarly adapted from a single book. The Sentimental Swordsman is such a classy film, perfectly crafted to deliver an emotionally satisfying arc, while the first Brave Archer film just kind of says, “Screw it,” and adapts as much as possible without a single thought towards being a complete work on its own. I like both films, but the better-made film is easily Chor’s.

The martial world is a treacherous place, as always, but some beautiful location shooting allows the world to feel more expansive than it usually does. Perhaps this is merely due to the journeys undertaken by the characters in the film, who must traverse icy rivers and snowy mountains in their quest for the truth. Chor Yuen depicts these travels similarly to how Peter Jackson would later capture the traveling in Lord of the Rings, so perhaps my idea of The Sentimental Swordsman as an epic wuxia is merely a side effect of knowing Peter Jackson’s films too well. In any case, The Sentimental Swordsman presents a wonderfully paced story that offers emotional resonance, exciting action and a wealth of interesting characters.

As I’ve mentioned in other reviews, Chor Yuen has generally favored a more fantastic approach to his action, delivering the impact more through editing than straight choreography. The Sentimental Swordsman is a real outlier in this regard, as the fights are rendered about as straight-ahead as can be. Of course, I loved it. Given the opportunity to shine, Tang Chia and Huang Pei-Chih make the most of every moment they’re given to choreograph. There are still instances of supernatural wuxia feats, but they are a minor garnish instead of the main ingredient. The down-to-Earth fights allow the audience to bask in the glory of basic, yet highly complex martial battles, featuring numerous weapons as well as unarmed combat in a beautiful combination. This approach to the action works well for the film’s emotional story, connecting us to the simple humanity of the characters instead of broadening that gap with wild wuxia fantasy.

The Sentimental Swordsman is a great film that stands out among the vast ocean of wonderful Chor Yuen wuxias. It is immediately one of my favorites of his, and one of his best films in my opinion. If you enjoy wuxia, this is a no-brainer; y’gotta see it!

Next up in this chronological journey through the Shaw Brothers Martial Arts catalog is Chang Cheh’s Chinatown Kid! See ya then!