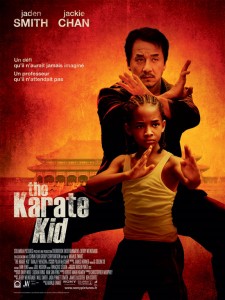 The thing is though, like most remakes, it’s pointless to watch if you’re familiar with the original. On the other hand, if I was a ten-year-old kicking phantom ninjas in the playground, this would be pretty high on my list of the most awesome films ever. Arguments could be made that the same ten-year-old would probably enjoy the original just as much, but as much as I hate to say it, it’s probably not true for the majority of kids. In this day and age, kids are jacked into entertainment and most of them aren’t interested in old things. So in terms of updating the film for modern kids, the film admirably succeeds. I’m more of the school that they shouldn’t get The Karate Kid if they don’t want to watch 1984’s The Karate Kid, but I should probably contain that kind of curmudgeonly rage for more important things.

I have to give the movie credit for being close to two-and-a-half hours and keeping my attention throughout. I would have liked to see more of Jackie Chan in action as opposed to Jaden Smith, but that’s a ridiculous expectation to have for a film titled The Karate Kid. But when I noticed that the awesome and amazing Yu Rong-Guang was cast as the evil kung fu master, I was supremely disappointed that he didn’t get any chance to show off his skill. He’s one of my favorite unsung Hong Kong actors, but unfortunately U.S. audiences will continue to be in the dark as the filmmakers did not utilize his full potential. A Jackie Chan / Yu Rong-Guang fight could have been off the charts.

Jackie Chan does a great job and may finally prove to American audiences that he’s an actual actor in addition to all the wonderful fighting and stunts they know him for. Of course, those in the know have known this for years, but it’s nice to see him shine in an American production without resorting to the traditional smiling Jackie stereotype. He has one big fight and it’s easily my favorite of the film and pretty well choreographed. A lot of it is lost in the shitty editing, but there is enough left to be enjoyable. When Jackie swiftly removes the jacket from one attacker and proceeds to tie up an entire group of ruffians with it while it’s still on the arm of the first guy, I have to smile. Sure, there’s been tons of better stuff but it’s pretty good for what it is. 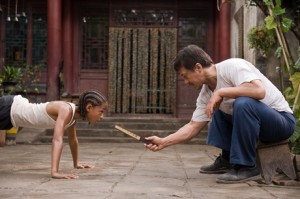 Jaden Smith is good as well, with only a few cringe-worthy moments, but the film still feels like a commercial for him and an effort to launch his film career by his parents (who both served as producers on the film). The chinks in his armor show through in a big chase sequence through crowded back allies, as the Chinese pursuers leap and scale walls with ease and Smith is stuck simply running fast or quickly closing a door. He does pull of the martial arts convincingly enough though.

I have to wonder how Chinese audiences reacted to this film, as its depiction of China literally runs down the list of American stereotypes of Chinese culture. I’ve seen a lot of Chinese movies and I can’t recall any that prominently featured incredibly talented violinists and pianists that didn’t stop practicing to eat. There’s also an attempt to add some Chinese mysticism to the film as Jackie and Jaden run up a mountain to a monastery to drink water from the Dragon Well. It’s handled so poorly and without imagination though that it only serves to remind me that I have a stack of super-fun Shaw Brothers films waiting to be watched. I guess I can hope that this film has something of a Kill Bill effect and intrigues new viewers into checking out some truly imaginative Hong Kong films. 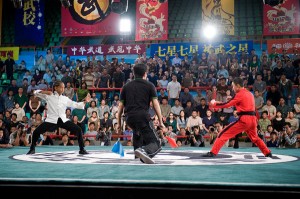 My main problem with the film is its lack of inspirational heart. In a film about finding inner strength and rising above those that oppress you, this is something of a problem. Maybe it’s the fact that the 80s inspirational rock music is replaced with generic “epic” Hollywood scoring, but whatever it is, I never felt all that inspired. It hits the same beats as the original but it lacks the same punch, that feeling that makes you pump your fist in the air and yell with reckless abandon. The tournament at the end has a distinctly enjoyable “Kid Kumite” feel to it though, with Wang Zhenwei filling the ruthless Chong Li-style roll perfectly. This is muted by the absolutely ridiculous final fight, with the big kick at the end being more a product of stupid exaggerated computer work than any skill Jaden Smith has. Which reminds me how incredibly forgettable almost everything about this movie is. The original is still popular because of its iconic imagery and dialogue. Everybody knows what you’re talking about when you say “Wax on, Wax off” or bust out the crane kick pose. Besides the jacket motif, there isn’t much to make a lasting impression here and while I could draw parallels about our increasingly shallow society, I’ll leave that rant for another day.

In the end, it’s not a bad movie but it’s only one to watch if you’ve got young kids with an interest in the martial arts (are there any other kind?). I must admit that I was entertained and the lengthy runtime flew by fairly quickly without me checking the clock too much. Big fans of the original will be better off just giving that one a re-watch, but if you’re feeling bold, this one’s not too bad if you don’t go in expecting anything.

Oh and don’t forget to stay for the credit roll and the Justin Bieber song featuring Jaden Smith on rap vocals. Just in case all the dancing, fighting, acting and running hadn’t sold you on Hollywood’s newest product sensation.