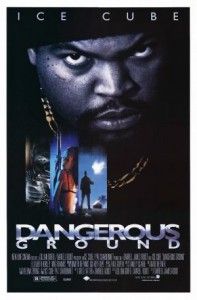 Tell me that shit doesn’t get you excited for an African-set martial arts flick! The score was composed by master bassist Stanley Clarke, and this marks his third appearance during Ice Fest! I had no idea he composed film scores, and apparently he did a lot of work on Ice films! Who knew? Anyway, Ice Cube’s father has died, but once he gets home he finds his younger brother Steven missing and his mother asks Cube to find him. So off he goes into the wild, strange world of Johannesburg and the drug culture within. 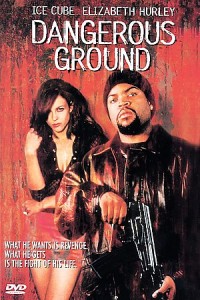 So if this sounds like a clichéd story, that’s because it totally is! I don’t really mind if the movie itself is interesting, and while I did enjoy the South African setting (it’s all shot on location there), there’s just not enough to hold your interest or keep you from dipping too far into the boredom zone. Many scenes go on too long and feel like they don’t serve any purpose. In one such scene, Ice Cube and Elizabeth Hurley get stopped in their car by a group of South African Nazis crossing a bridge. Other than remind the viewer of the iconic scene in The Blues Brothers when Jake and Elwood run into a group of Illinois Nazis — I hate Illinois Nazis — while they too are crossing a bridge, I couldn’t figure out why the scene was there. While I enjoy the unintentional comedy moments like these bring, Dangerous Ground was trying damn hard to be dramatic and thrilling throughout, and most of the time failing.

While searching for his brother, Ice runs into his neighbor played by Elizabeth Hurley. She’s a stripper because someone had the great idea of having Hurley say, “Yeah well, this is the new South Africa,” and then cutting immediately to a stripper shaking her ass with the South African flag painted on it. Nope, I’m not making that up. Meeting Hurley begins the search for his brother in earnest, but instead of becoming engaging, the search consists of wandering aimlessly through Johannesburg night clubs and scoring crack for Hurley’s character.

Eventually we find out that a drug lord named Muki might know where Steven is hiding. Muki is played by Ving Rhames, who gives us his best shot at a thick African accent. Rhames does well enough for the most part, but there are times when the cracks definitely show. But that’s OK because director Darrell Roodt, or some member of the creative team, saw fit to provide Rhames with a big chicken foot to suck on between lines to remind you that Muki is African as fuck. 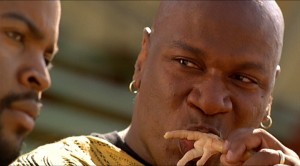 Roodt’s direction is definitely shoddy in spots, with an overuse of close-ups plaguing the entire film. At least the people in the movie are rather nice to look at, so I could easily overlook this if the rest of the ducks were in their respective rows. The cinematography is also nice at times, shooting the African landscape with a definite love and appreciation for its subtle and often unfilmed beauty. Unfortunately, as most of the movie is close-ups of people talking to each other, these gorgeous, gold-tinged vistas are only seen once in a great while. Roodt also likes to play with different film mediums mid-scene, cutting back and forth between grainy black and white footage and rich color stock during the opening to evoke a stylish, “That’s cool” response from the viewer with no real weight behind the decision. It does look cool and it honestly enthralled me, so I can’t really complain. The technique comes up throughout the movie in small doses, most notably during the big action climax where TV footage of a soccer match is intercut with the action.

Yep, you read that right: action. The last act of the film finally delivers the action that main title theme song promised, but as this is a somewhat low-budget ’90s film, it’s mostly just Ice Cube and one of his brothers firing massive quantities of bullets indiscriminately out of their AKs. Queue my goofy grin and the slow motion shots of artsy vases and decorative African masks being ripped apart by bullets. I really enjoyed the final act even if it is rather dumb. If nothing else, it delivered some very welcome excitement, including this classic line that Ice Cube will most likely want on his tombstone, “Game over, motherfucker. Bok, bok, bok.”

Dangerous Ground is a film I would only cautiously recommend. I do have a feeling that there are people out there that love this movie, but I fear that they are a very small minority, so you’re probably better off not taking the chance and avoiding this one. Still, there are a few good B-Movie moments that liven things up a bit, and the setting is great. Dangerous Ground isn’t bad so much as it’s just kinda slow and boring. And unfortunately Ice Cube’s contribution to the soundtrack, while good, is not called “Straight Outta Johannesburg,” something I thought of while Cube was searching his brother’s apartment and I saw that he had a giant N.W.A. poster on his wall.