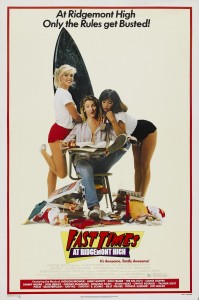 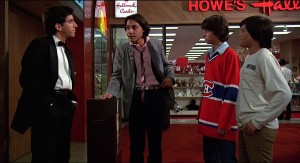 Even though Fast Times at Ridgemont High is an ’80s movie through and through, its characters and the situations they find themselves in could exist in any era. The stories are simple tales of friendship and love, working shit jobs and finding your footing as you transition into adulthood. These are universal struggles that will resonate as long the world doesn’t descend into nuclear apocalypse and there are kids going to high school. It might take a current-gen high school kid a while to adjust to the ’80s vibe, but I feel confident that most would be able to look past that and see a bit of themselves and their friends in the film. I could be high on nostalgia, but it just feels like such a universal film.

The music keeps the pace rolling ever onward, right from the get-go. I imagine your experience would be different if you didn’t care for ’70s and ’80s rock, but if you don’t care for ’70s and ’80s rock music you’re truly missing out. Even though Cameron Crowe only wrote this one, his stamp and his focus on music is undeniably on it throughout. The music is not just music to bridge the dialogue scenes, it is woven into the fabric of the screenplay and the character’s lives on-screen. It is its own character in the film, just as it is in the lives of many kids in high school. Outside of movies, music was always my quick escape, my refuge from the bullshit that everyone seemed to be slingin’ my way. Perhaps that’s why many of Crowe’s films resonate so well with me. 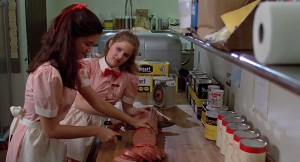 It also helps that literally everyone in the film is phenomenal. Each young actor brings something unique and interesting to their character. I was especially taken by Jennifer Jason Leigh and Brian Backer (who made his debut the year earlier in The Burning). Amidst all the frank sexual dialogue and nudity that Fast Times has, their relationship is a sweet heart to the film and captures the unsure nature of young love perfectly. And who could forget Sean Penn’s killer performance as pothead surfer Jeff Spicoli, spiritual father figure to Bill S. Preston, Esq. and Ted “Theodore” Logan.

Fast Times at Ridgemont High was a part of the 2013 Blind Spot Series where I see one movie a month that I feel I should’ve seen a long time ago. It’s all the brainchild of Ryan McNeil over at The Matinee, one of the web’s premiere film blogs. Head over there tomorrow where he’ll have a post of his own for the series, as well as links to all the other people taking part in the series.