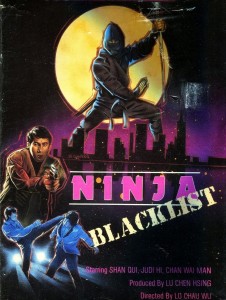 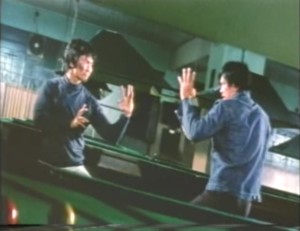 What makes up the remaining 79 minutes is about what you’d expect from that setup: Ying-Long and Ying-Hu going around Hong Kong finding the dudes on the list and then fighting them to the death. In theory, this is awesome, but in this case it’s definitely less than it could have been. The fights were choreographed by Leung Siu-Chung who has loads of great films under his belt, but director John Law Ma chose to undermine whatever quality there was to the choreography by choosing shooting angles that specifically make it clear that no one is actually hitting anyone. If there’s anything a martial arts film should attempt to do, it’s to craft believable martial arts sequences. Black List mostly fails at this, so instead of a fun 80 minutes, it’s kind of slow and hard to sit through.

The other major hurdle for Black List is the print quality. The only copy I could hunt down was a VHS under the title of Ninja Heat (which is one hell of a misleading title), and it’s washed-out, pan & scan and dubbed. Ugh. It seems like movies only available in poor quality prints always have a bunch of night sequences; Black List features a number of these and it’s nearly impossible to make anything out in them. For instance, there’s one fight that starts in a billiard hall and moves into the streets of Hong Kong. The villain jumps onto a truck or something (I couldn’t tell for sure what it was), and our heroes then climb aboard the roof of a VW bus in chase. I think they caught up with the truck and leapt onto it from the moving VW — which sounds awesome — so I wish I could have actually seen what happened. 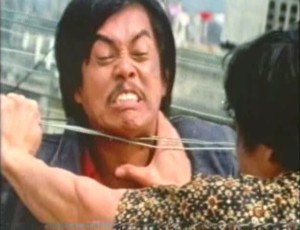 Despite its general lack of quality in both print and filmmaking, Black List does have a few fun strokes. Instead of simply crossing names off his list after he takes down a villain, Ying-Long has the list on the wall and he throws a dart at his next target. At one point he does so while sippin’ on a 40, which amused me to no end. I guess I never considered that they might have 40s in Hong Kong, but now I know. The end boss is also quite a character, and he fights his way through the final battles while wearing a snazzy matching Hawaiian shirt and short set. Don’t know that I’ve seen that before!

The highlight of the film for me, though, was a rooftop battle towards the middle of the film between Chan Sing and Michael Chan Wai-Man. It starts on the streets, but soon Ying-Long chases his prey up the stairs until there’s nowhere else to go but the roof. There they flail around in a fun way, and at one point Michael Chan Wai-Man even uses some hanging clothesline to attempt to strangle Ying-Long. It’s not a great fight by any means, but it entertained me far more than anything in the film previous so it was a welcome change. It was also the first fight in the daylight (at like 50-something minutes into the movie!), so maybe it was just that.

I can’t really recommend tracking this one down, but I will say that I think it would be a far better watch should someone out there happen to remaster it and release a widescreen, original language DVD of it. If that happens I’ll give it another go, but until then I’m gonna call this one a dud. Chan Sing was pretty dope, though, delivering quite a few moments of total brutality to his targets.

Next up in this chronological journey through the Shaw Brothers Martial Arts catalog is my grand and long-awaited return to forward movement in this series! I’ll be kicking off 1973 with Ho Meng-Hua’s Ambush! See ya then! (Hopefully sooner rather than later.)