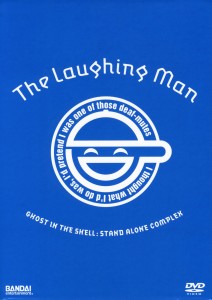 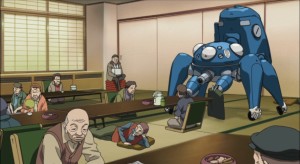 They may have even put a little too much in the film. There is a rather unnecessary subplot revolving around the Tachikoma robots, which are multi-legged tanks that are basically smaller, nimbler versions of the huge thing Kusanagi fought at the end of the first film. It comes a bit out of nowhere, and I’m glad I played the Ghost in the Shell PlayStation game, otherwise I’d have had no idea what the things were or that they had such oddly high-pitched voices. (OK, OK, the things in the game were called fuchikomas, so sue me. They’re close enough.) While the subplot itself is interesting, its conclusion doesn’t have the dramatic weight it’s clearly supposed to. It also carries a humorous tone that the rest of the film lacks. Rather than lightening the mood, I found that it broke the mood instead. And with a film this long, it might have been better to slim things down a bit and omit the stuff that had little bearing on the Laughing Man case. 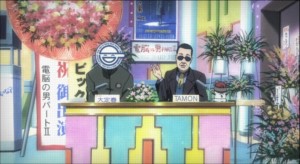 So what is the Laughing Man case, you ask? Well it’s a prequel to the events of the first film, so I don’t have to worry about spoilers here (although it takes place a year later; figure that out if you can). The case is an unsolved cyber-terrorist blackmail campaign that ruined the stock of several major corporations six years prior to the film. The guy’s been silent since then, and suddenly pops up to wreak havoc once again. The Laughing Man’s identity is revealed somewhat early in the film, but his motives and goals are left rather obscure, and the case takes some really bizarre turns that lead from corrupt government agencies to medical research fraud. All of it is surrounded by the Laughing Man’s inexplicable hacking skills that allow him to hack into people’s prosthetic eyes and make himself invisible or cover his face with the goofy looking logo that his name is derived from. 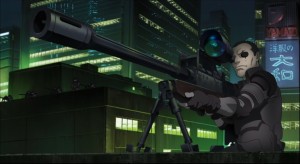 Like all the Ghost in the Shell stories, it’s very cerebral and more than a bit confusing with its pileup of schemes within schemes. As a compilation film, this does work against it. More breathing room to digest the information and figure out what’s going on would be nice, but that would eliminate the purpose of making it a film in the first place. Unlike the second film, though, I felt like I had a grasp of the basic plot by the end of it all, even if some of the finer points were lost on me.

In the midst of all the brain-hurting plot twists it never forgets the fun stuff. Those invisibility cloaks, high-tech gunfights, and cyborg fisticuffs that are the main draw of the series still play huge roles here, so you’ll never be in a state of boredom. Some of it feels a tad redundant to the earlier films, though. In particular I’m thinking about a battle between Kusanagi and a giant suit of combat armor that played out in a disappointingly similar way to her final showdown in the first film. But if in this instance Kamiyama went a little too far in homage to Mamoru Oshii, most of the time he does an admirable job of capturing the feel and tone of the earlier entries in the series without falling into the distracting bouts of excessive artfulness that can detract from Oshii’s films. 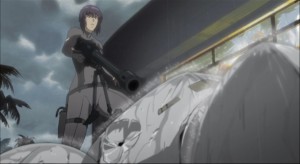 And I can’t end this review with out a mention of the music. It’s mostly composed by Yoko Kanno. Every time I hear something she’s worked on it leaves me impressed, and this was no exception. She consistently writes fantastic scores across a huge variety of styles, and the songs she composed for this series will undoubtedly stay with me as the most memorable part of the experience.

Anyone who liked the original Ghost in the Shell film will find a good deal to like here as well. And since this is a prequel, it’s not a bad place for a newcomer to jump in either. Its flaws aren’t serious enough to reduce the fun factor, so give it a shot if you’re in the mood for an intellectual thriller.