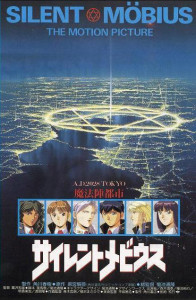 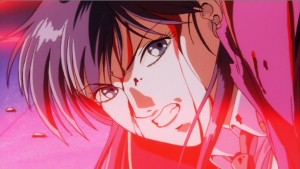 The first problem I had with the film is the frame setup of the story. It starts out with Katsumi already on the team and chasing down the bad guys, then cuts immediately to four years earlier. The technique is certainly not an unusual one, and it can certainly be done well. In fact, it probably would have worked just fine here, too, if it had been executed better, but instead it fell apart. The reason is that the film forgets to complete the loop. When Katsumi learns of her powers, she immediately rejects the idea and refuses to believe it. What we never see, however, is the moment when Katsumi actually accepts her fate and joins the team. That whole part of the story is forgotten. Katsumi’s angry rejection of her powers also gets pretty old after a while when we already know that she becomes part of the force in the end.

There are a fair amount of action sequences with the demonic Lucifer Hawk bad guys popping up all over the place, but it’s not all that epic or exciting, though it is fairly well animated. It’s also really creepy tentacle action. The film never has actual tentacle rape, but it goes out of its way to make you think about it. I do not remember that happening in the TV series, but that series was extremely forgettable. This film is, too. I’m having trouble coming up with anything interesting to say about it. Perhaps the most interesting thing is that it feels so similar to the TV series even though the two versions share very few cast members.

In terms of telling the story it manages to illustrate the most important things about Katsumi’s origin, and in all honesty the ending of the film was a perfect way to wrap the whole thing up, tying the “present time” plot back into the flashback bulk of the film. Had it addressed Katsumi joining the force I would have no problems with the story. What hurts the film most is something far less easily fixed. It’s just plain ordinary. The action is never exciting enough to make you want to see more, the characters lack any interesting traits to make you care for them, and the setting is meaningless and unexplored.

Silent Möbius is one of those odd ones that I just don’t care for, even though I can’t pinpoint many specific flaws. It’s just drab, and nothing else. It makes for a dull time-killer of a film, but at least it doesn’t overstay its welcome.