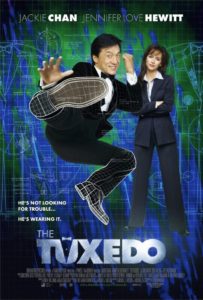 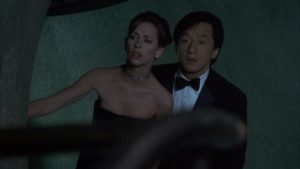 The film’s comedy is definitely hit or miss depending on your sense of humor. In the intervening years since I first saw The Tuxedo, I’ve become a real fan of Robert Rodriguez’s movies for kids, specifically Shorts and the Spy Kids movies. The Tuxedo carries a similar style and sensibility, so it was much easier to slide into its groove than it had been previously. I don’t know that any of the jokes are great, and a fair amount of them are painfully dumb (like Jackie shaking his ass in people’s face like a stripper), but if nothing else it’s weird and unique.

What I wasn’t expecting was how much it replicates Hong Kong’s ability to shift through multiple tones rapidly. Just a short while after that deer comically pisses in the stream, a guy is drowned with a bag tied over his head and then filled with water. It’s pretty graphic for a movie that feels like it’s aimed at a kid-centric family audience! Rarely have I seen such swift shifts in tone than in a Hong Kong film, and this kind of thing continues through the entirety of The Tuxedo. I greatly enjoyed this aspect, but I imagine it was a source of much derision from American critics/family audiences. 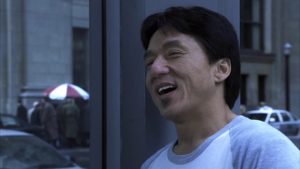 The film’s action also takes a page out of the Hong Kong playbook by including a fair amount of wirework into the choreography. Jackie Chan generally doesn’t use a lot of wires, or at least noticeable wires, so this is notable in and of itself. But in The Tuxedo, wirework is used specifically to communicate the superhuman abilities of the tuxedo’s advanced technology. Jackie plays a character without a martial arts background, so all of his skill comes from the tuxedo. This is a far superior method than using a CGI-Jackie, so I appreciated this perhaps more at this point in time than I would have previously. The wirework looks its best during the final fight between Jackie and the villain (who has also acquired a super tuxedo). Bradley James Allen doubles the villain and while the fight is rather brief, it represents the closest thing to a Hong Kong-style fight in Jackie’s modern American work up to this point. The editing is still nothing close to what would be ideal, but at least the other elements are there. 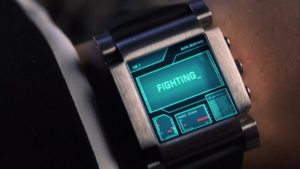 While I appreciate the fight for what it is, it’s still frustrating for what it’s not… perhaps more so because this one comes very close to delivering what you want out of a Jackie Chan fight. I remember a Jackie interview where he talks about how he was told at some point that American audiences don’t want to watch an extended fight scene of traditional Hong Kong length; they would get bored with it, so they need something shorter. Even though Jackie proved this false with the success of Rumble in the Bronx and Supercop, it boggles my mind that they wouldn’t at least try to deliver a great Jackie fight that would give something special to the audience. Instead, they mold a not-so-Jackie movie into a Jackie vehicle and it’s always apparent. Since Jackie spent so many years in control of his own work as a writer/director/choreographer, I have to wonder what he thought about the way these American films were handled.

I can’t argue that The Tuxedo is a good movie, but I was entertained by it. I’d re-watch it over Shanghai Noon or Rush Hour 2, even though those are probably better movies in overall terms. What can I say — I like Jackie, I like Jennifer Love Hewitt, and I like dumb comedy. It also features awesome practical FX work to bring its bugs and larvae to life (it’ll make sense if you watch it), and there’s a James Brown cameo! Turn your brain off and enjoy a decidedly off-beat movie.

Next up in this chronological journey through the films of Jackie Chan is another American Jackie film I didn’t like back in the day: Shanghai Knights! See ya then!