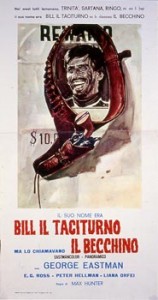 Click the play button to listen to the Django Kills Softly theme while you read! 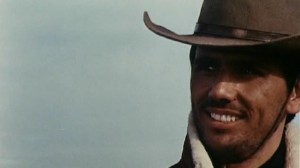 Despite a kid getting shot in the chest during the first minute, this isn’t on par with the bloody violence seen in Django. People get shot but they fall over clutching their completely bloodless wounds. It’s not that big of a deal, but it is in stark contrast to the original film’s principles. There are tons of big cliché Western death falls from rooftops or banisters though, and I’m a sucker for those, so this makes up for any lack of blood. Django rides into the town controlled by the ruthless Thompson and his men. It becomes something of another Yojimbo story at this point, as there’s a second group of men fighting Thompson for control of the town. There’s also a bandit faction led by El Santo (no relation to the Lucha Libre film star), looking to take what they can from the situation. It’s a good thing that I enjoy the base Yojimbo story so much, or else these knock-offs would get rather tiring. 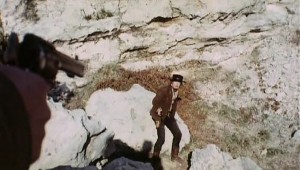 As I mentioned earlier, Eastman is passable as Django here, but he’s no Franco Nero. He’s something of a lightweight gun, but he’s fast enough on the draw to take out his share of men. The real strength of this Django lies not in brute force or crushing glares. As the title implies, this Django has ninja-like skills of sneaking around softly and it makes for some fun scenes. One of the best is when Thompson’s men come to Django’s room at night to kill him. They look around and Django is nowhere to be found. The men hear something behind the bathroom door, but their Django is in another castle. The real Django jumps down from the rafters, firing as he falls, killing one and then the other out of a daring roll across the floor. Wow! This Django is one BAD, stealthy motherfucker. I wasn’t really expecting the title to be literal, but without a doubt, this Django is like a cat, killing soft and silent. It should be noted that the stealth skills Django showcases in this film are not even close to the level of ninjitsu prowess on display in Django the Bastard. In this way, I suppose you could think of this film as also being a prequel to Django the Bastard, a film where Django has truly mastered the art of the shadow. Therefore I am only left to wonder if in the bowels of some dank film archive there exists a Django martial arts training film, and if not, there should be. But I digress… 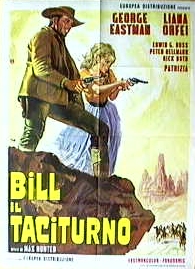 The dubbing is good here, about as good as dubbing can be for a spaghetti western I guess. The film is pretty well shot with some excellent use of snap zooming to punctuate Django’s skill at shooting canteens thrown into the air. The interior sets reminded me of the original Star Trek with bright green painted walls and the like. The film’s score by Berto Pisano is good as well, with some really inspired moments and others that are rather dull and average. Overall, it’s a spaghetti western score so it’s fun to listen to if nothing else.

We have another saloon fight in this film, but it’s not as good as the one in Django. This one is a lot more standard and features all your favorite saloon fight clichés such as:

Lots of dudes diving headlong into each other!
The guy who lands on the floor under a broken beer barrel and decides to drink instead of going back to the fight!
Women coming from behind and crashing chairs and bottles onto the combatant’s heads!

Crosscut with this scene is another fantastic, sneaking Django scene though, so all is not lost. 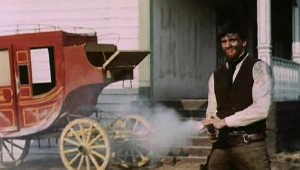 Tension sets in during the finale and its duels, ending the film on a fun, exciting high note. It’s a solid block of violence, but the musical score is the upbeat main theme (the one featured above) so there’s a definite juxtaposition of darkness and light going on that surprisingly works well for the scene. Before it’s all over, Django pulls one final, impossible ninja feat, much to my delight, and cleans up the town in the process. I liked this film a lot more than I expected to. It’s a country mile from being high art, but you could do a lot worse than this softly creeping Django and the multitude of stuntmen falling from high places seen here. Realistically, this is a Django film in name only, but that’s okay as it’s a good Western on its own that rises above its standard nature and story thanks to a good performance from Eastman and some entertaining creative license with Django’s mortality and the integration of stealth.

Will Django’s offspring live up to his father’s legacy? Come back tomorrow as we close out week one of A Fistful of Djangos with Uncle Jasper’s look at 1967’s Son of Django!