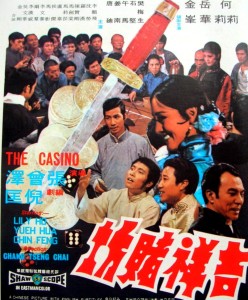 Luo Tianguang is an ultra-gambler, able to hear dice rolling in the cup and know how they’ve landed. He’s very close to a modern-day wuxia hero in this way, not to mention his ability to throw coins and other objects and have them embed in whatever he’s aiming at (whether it’s flesh or wood). The Casino is heightened, exaggerated and relatively unbelievable, but it is these qualities specifically that make it so much fun (just like many of the Shaw Brothers films).

It’s wrong to think of this as an action film, but there is a fair amount of it sprinkled throughout. And these sprinkles are glorious fun. The choreography could easily be better, but coupled with a lot of gruesome gore and the ever-moving, snap-zooming camera of Chang Tseng-Chai, it makes for quite the sugary confection. This movie is a great example of shooting around bad or mediocre choreography, as the camera never lingers too long on anything that might break the illusion. This combo of fighting style and shooting style is perfectly suited to the film, and it allows the audience to buy into the scenes much more as we’re focused on the specifics of what just happened instead of watching a long take of mediocre choreography. This makes the fights fast and exciting instead of bogged down.

It’s not all fun and games, though, as the melodrama is ultimately tragic, casting a shadow over the fun of the film. The drama isn’t carried out well enough to be truly moving, but it is sad and Ni Kuang’s juicy script allows for some excellent situations for the vibrant cast of characters to find themselves in. The gambling confrontations are easy standouts, especially with Enter the Dragon‘s Mr. Han himself (Sek Kin) playing one of the main villains. Fan Mei-Sheng also gets another juicy role as a devious assistant.

The Casino isn’t exactly about a casino, but instead what goes on to the characters around and involved in one. The casino is merely the thing that brings these characters together and causes them to clash. I bet you’ll think twice about playing the dice “just one more time” after seeing this film. The Casino is excellent entertainment, and I highly recommend Shaw fans check it out. And for those interested in such things, John Woo was the assistant director here.

Next up in this chronological jaunt through the Shaw Brothers Martial Arts catalog is Pao Hsueh-Li’s Finger of Doom! But that one will have to wait until November, as I take a martial break during October and focus on the horror genre. See ya then!