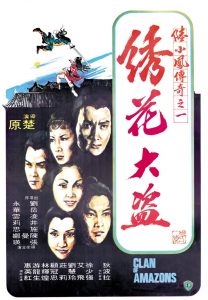 The Embroidery Bandit is running rampant through the martial world. He steals whatever pleases him, and with his trademark embroidery needle skill, he blinds everyone who attempts to oppose him. Everywhere he strikes he leaves behind an embroidered piece of silk as his calling card. Seems kind of naive to leave something to connect you to the crime, but the Embroidery Bandit is so badass he has no fears of being caught! The police are at their wit’s end, so they give the silk and their trust to Lu Xiaofeng (Lau Wing), a clever, observant martial hero who can solve even the most convoluted of mysteries. His first stop is to catch up with his friend Xue Bing (Ching Li), who just so happens to be incredibly adept at throwing things like darts and needles. The game is afoot…

The action is well-choreographed by Chor’s usual duo of Tang Chia and Huang Pei-Chieh, but it simply can’t hang with the best films of the year, two of which — The 36th Chamber of Shaolin & Snake in the Eagle’s Shadow — sandwiched its release. In part, this is due to Chor’s usual tendency to prefer shorter fights over longer, more technical work, but disappointment shows up the most when Chor captures the stuntmen’s performance in longer takes. I know this sounds antithetical to conventional fight wisdom, but the longer takes allow you to see just how far the choreography is from the level of intricacy used by Lau Kar-Leung or Sammo Hung. This isn’t exactly the film’s fault — it’s not trying to be anything but a Chor Yuen movie — but glimpsing long-take fight choreography made me expect something better. The action is very well-shot, though, mixing a healthy amount of gorgeous wide shots into the fights.

The choreography is more down-to-earth, similar to The Sentimental Swordsman, but it retains a solid amount of wuxia fantasy; it is about a villain throwing needles into eyeballs, after all. The shift to favor realism befits the character of Lu Xiaofeng and his flexible approach to the martial arts. Chor doesn’t place any emphasis on Lu’s specific martial training, so the character often switches between fighting bare-handed and armed, depending on the situation at hand. According to Lu’s Wikipedia entry, though, he is known in the novels by his ability to catch others’ weapons between his fingers. This is something you see relatively often in wuxia films, going back to at least the ’60s, so perhaps that’s why Chor and the choreographers stayed away from it as a defining technique. I did notice him grab a sword with his fingers towards the end, so it’s not completely missing, but there’s no emphasis on this moment whatsoever.

Unrelated to fighting, on the Wiki page I also noticed that Lu Xiaofeng is supposed to have “Four Eyebrows,” two on his eyes, and a complementary pair on his top lip. Lau Wing sports nothing of the sort, perhaps because that look is more reserved for villains in film. My first thought was Michael Chan Wai-Man in Judgement of an Assassin, but there’s bound to be a whole bunch if we all put our minds to it. For now, though, we’ll just have to assume it was a creative choice to leave Lau Wing’s handsome face free of wispy eyebrows. This is based on the second novel of a seven-novel series, so perhaps he grows them over the course of the series. 😀

Also of note is the film’s mid-section which features a group of spies who live in the Cantonese section of town, complete with Cantonese dialogue. As far as I can remember, this is the first instance of a Shaw wuxia film showcasing the Cantonese wave affecting the Hong Kong film industry at the time. Makes sense, since Chor Yuen’s own 1973 film The House of 72 Tenants, was the film that really kickstarted the revitalization of the Cantonese language in film. I also know that two of Chor’s later 1978 films, Heaven Sword and Dragon Saber and its sequel, were completely produced in Cantonese, so perhaps this section in Clan of Amazons was a bit of a test.

Clan of Amazons is a nice mix of Chor Yuen’s dangerous martial world and the playfulness of his previous film, Pursuit of Vengeance. I love the film’s villain, and the premise of a Sherlock Holmes wuxia, but I wish its action was more interesting, and it wasn’t quite as talky. In spite of its flaws, I still enjoyed it quite a bit.

Next up in this chronological journey through the Shaw Brothers Martial Arts catalog is Ho Meng-Hua’s continuation of the flying guillotine craze, The Vengeful Beauty! See ya then (hopefully soon)!