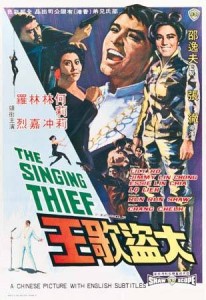 The Singing Thief is steeped in pure 60s culture and for anyone ready to revel in such things, it’s a true joy. I’m not the biggest fan of the styles myself, but literally every moment of The Singing Thief was exciting, dangerous and gorgeously captured. There’s more sunken living rooms, tacky night clubs and delightfully dated 60s dance numbers than you can shake a sequined ass at, and I loved every minute of it. It all felt very similar to an Austin Powers film at times, with a distinct, lighthearted tone, but in spite of this the actions of the characters are always somewhat rooted in reality with danger and the threat of death looming overhead. By the time we get to the climax of the film, Chang Cheh almost entirely ditches the lightheartedness for pure, gritty action cinema and honestly I couldn’t ask for a better ending. When I saw the credit for action scenes choreographed by Tang Chia and Lau Kar-Leung, I wondered why they’d bother wasting their time with a musical such as this, but it all made sense when the fists started to fly in the second half of the film.

Seriously, the fights in this are better than in most honest Shaw Brothers martial arts films up to this point. The fearsome duo of Tang Chia and Lau Kar-Leung were really starting to get creative and invent wonderful new ways for the characters to butt heads in an action scene, and this is readily apparent in the film’s first action sequence: the crematorium fight. How the film gets us to the crematorium is somewhat convoluted, but the results are nothing short of pure awesome. Poon finds himself in a sad moment, lamenting the loss of a friend, when a team of dudes ready to fuck some shit up run in and arm themselves with fireplace shovels and body hooks. Oh yeah!

Our hero Diamond Poon is played by Taiwanese singer Jimmy Lin Chung, and he fits the bill perfectly. He’s able to handle everything Chang Cheh throws at him, from songs about diamonds and carnations to intense martial arts scenes. He has the look of a young Chow Yun-Fat, mixed with the youthful spirit of Alexander Fu Sheng, making for a truly enjoyable lead actor. During the film’s final action scenes, he proves his worth as a hero (if you weren’t already on board), as he can not only sing and move stealthily, but also throw down martial arts and fire ridiculously accurate pistol shots from many yards away. Diamond Poon does it all! He engages in moments of true brutality as well, at one point bashing a guy’s head into a stone pillar repeatedly and later throwing guys off the side of a three-story scaffolding. Also along for most of the ride is the lovely Lily Ho Li-Li who plays the main love interest. The romance angle is light and somewhat inconsequential, but its presence is yet another layer of the onion and adds to the overall experience.

In Chang Cheh’s memoir he mentions how he had tired of making wuxia pictures and wished to spark his creativity. The Singing Thief shows that his boredom wasn’t with martial arts specifically, but more the period setting and the same old genre trappings that so many martial arts films exhibit (even then, in the infancy of the genre). With this in mind, The Singing Thief is quite interesting as it incorporates multiple genres into one highly enjoyable film. His effervescent camerawork is on display throughout, keeping the pace rapidly flowing. One shot in particular stuck out to me as quite inventive. It was a slow motion shot that incorporated a dollied, horizontal camera move. The characters dance about in the field in slow, elongated strides, but the camera seemingly moves at a normal pace to capture them. It gives the shot an odd quality that makes you think that only the actors are in slo-mo, but in reality the camera must have moved incredibly fast to facilitate this interesting and thoroughly intoxicating shot.

While the film is not exactly a musical, the songs it does have are all very poppy and full of 60s vigor. Within the first ten minutes, you get Jimmy Lin Chung inexplicably in a pirate suit singing the theme song, followed immediately by a nightclub performance complete with huge plastic diamonds hanging from the ceiling and a requisite Nehru jacket. This opening sets up a much more musical film, but in actuality it’s more about thievery and our hero eluding the bungling cops by hanging out at Lo Lieh’s luscious mansion. I was pleasantly surprised to get a lighthearted crime drama/thriller/comedy/musical instead of a straight musical.

The Singing Thief is not a movie for everyone, but if you dig a 60s vibe and you enjoy multi-genre pictures, I think it’s safe to say it will entertain you. For strict martial arts fans, I’d say you could go either way, but the crematorium fight is definitely worth seeing and the final scenes play out on the Shaw Brother’s period sets, as the villains chase Diamond Poon into a movie studio that’s closed up for the night. You get some cool behind the scenes looks at the sets and the sound stages, which added another layer of fun for me. The film was a delight to watch and if nothing else, Lo Lieh’s goatee is mean and worthy of your time. Chang Cheh fills each frame with genuine bursts of color, resulting in a finished picture that is able to satisfy both the dark and light side of my psyche. Didn’t expect that at all.

Next up in this chronological series of the Shaw Brother’s martial arts films, it’s another from Chang Cheh and one I’ve been really looking forward to, Return of the One-Armed Swordsman!