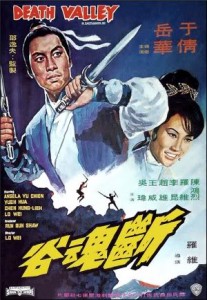 The fights are mostly enjoyable, but are generally uninspired “one vs. many” battles that need a hell of a lot more choreography than what’s there to make them sparkle. The action of Death Valley was choreographed and directed by Han Ying-Chieh, who later continued working with Lo Wei in his more famous works with someone named Bruce Lee. In any case his work here doesn’t seem to be anything special, but there are some excellent moments sprinkled throughout, with the majority coming during the finale.

Lo Wei isn’t an overly artistic director, but he is one that knows exactly what he wants. Death Valley is filled with wonderful shots and great cinematography, as well as some of the better uses of snap zooms I’ve seen in a while. During one of the big fights in the middle of the film, there is one particular shot which starts out as a medium shot of Yueh Hua fighting in front of a giant calligraphy character on the wall and then the camera snap-zooms out to reveal an entire courtyard with bamboo training poles and yet another set of oncoming bandits. It’s a hard one to describe, and it’s a very small moment within a larger action sequence, but it’s skillfully pulled off and adds a lot of visual flair to an otherwise average fight.

The engaging story of martial friendship between the two swordsmen leads us to a grand confrontation on a mountaintop in the titular Death Valley. I don’t want to reveal too much, but let’s just say that if the region wasn’t already called Death Valley, whoever found the aftermath of the final battle atop the hill would’ve definitely started calling it that. These exterior hills are used in a stunning amount of Shaw Brothers films, and to me they are to Shaw Brothers what Vasquez Rocks are to American Science Fiction films: endlessly used, always awesome. Lo Wei’s distinct eye for a great landscape shot helps them look new, fresh and better than ever in the finale of Death Valley. I often wonder what these hills look like nowadays. Probably filled with high-rises or some such desecration. From Chang Cheh’s memoir it seems like these exteriors might be in Taiwan or Japan, as he distinctly mentions Shaw Brothers filming tons of exteriors in both locations.

Chen Hung-Lieh and Yueh Hua are great in their respective roles as the two main swordsmen on opposite sides of the situation. Like The Black Butterfly, director Lo Wei has a brief role and he again performs admirably. He was an actor before he was ever a director, and he definitely has equal chops both in front of and behind the camera. Wong Wai plays the ruthless villain of the film and does a great job in his first screen performance. He’s a little hammy here and there, but the scene when he searches for the injured Yueh Hua in the dwelling of an elderly lady and her grandson is intense and heartbreaking as he ruthlessly interrogates and tortures them both. He was only in nine films in his entire career, but just off of the strength of this one scene it seems like he could have made a living playing heavies like this one.

Overall Death Valley is pretty good and it comes together nicely. Lo Wei is a competent, visually interesting filmmaker and I look forward to reviewing more of his work. And if you saw this movie many years ago and you’re trying to settle a bet: Yes, this is movie where Yueh Hua kills a guy by throwing a chopstick into this throat.

Couldn’t find the trailer, but here’s the whole movie.

Next up in this chronological series of the Shaw Brother’s martial arts films,  it’s Ho Meng-Hua’s The Jade Raksha with Cheng Pei-Pei!