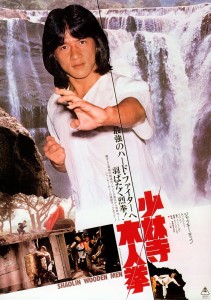 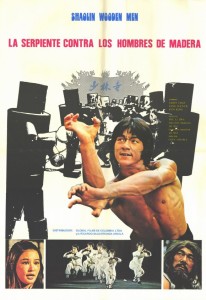 In my review series through the Shaw Brothers catalog, I’ve often lamented on the lack of training sequences in the early films. It took years for this genre convention to really take hold, so when I sat down to watch Shaolin Wooden Men and I discovered (or re-discovered, I guess) that nearly its entire first hour is one long training sequence (and there’s even a late-game final training towards the end of the film), I was in heaven. This may not be regarded as a top-shelf kung fu movie, but for me it was pure entertainment. When Jackie sneaks through the mountain, past the giant waterfall and into the dark dungeon of Shaolin to learn fierce kung fu from a chained prisoner, I can’t help myself but to be entertained. It’s great stuff! There’s just nothing like watching a humble nobody become a martial badass before your eyes, and Shaolin Wooden Men handles that transition really well.

It helps that Jackie is so spry, agile and youthful, and up to this point in his career this has never been so front and center as it is here. This may have been his third starring role, but it honestly feels like the first true Jackie Chan film. The other films were Jackie struggling to find himself, and Lo Wei struggling to understand how to use Jackie, but here the pieces come together rather well. The trademark Jackie comedy is still largely missing, but there are flashes and hints of the greatness to come, so it can be seen as something of a foundational film.

And if you’ve seen other Lo Wei movies, and you’re thinking to yourself that this one feels completely and fundamentally different, then you’re absolutely right because Lo Wei didn’t direct this. He may have put his name on it after the fact, but the true director of the film was Chen Chi-Hwa. According to Jackie Chan’s autobiography, I Am Jackie Chan, he states that Lo Wei was frustrated with the box office numbers of New Fist of Fury (and presumably with his lack of understanding of how to use Jackie properly and make him a star), so he asked Chen Chi-Hwa to make the film for him. And Chen Chi-Hwa was actually willing to work with Jackie, collaborating on the film as a unit. Jackie even relates stories of jokingly choreographing the fights as pure slapstick routines to amuse himself, but changing them back before filming for fear that Lo Wei would get furious. Jackie calls Shaolin Wooden Men his “first ‘dream movie'” and it’s an important film for him not just for this, but for what it would eventually lead to. Shaolin Wooden Men didn’t do well at the box office, but it got industry people to notice Chan (and would eventually lead to his work with Yuen Woo-Ping). As I’ve become a fan of Lo Wei’s rigid style while watching his work with the Shaw Brothers, I could instantly tell that this was the work of someone else, but it’s nice to have Jackie himself backing me up on that!

The fights were choreographed by Jackie Chan and Gam Ming, and they are easily the best fights of Jackie’s career up to this point. Free from the oppression of Lo Wei’s staunch opinion of what kung fu should be, Jackie was free to experiment. The resulting fights are quite inventive, while still staying within the general framework of a kung fu fight. He’s not a kid in a candy store just yet, but you can feel Jackie really stretching out and testing himself with the choreography here. He jumps, flips and rolls around in amazing ways, and it’s incredible to watch. I especially enjoy his heightened version of Snake style kung fu, with his hands mocking the striking head of a snake, and his entire body taking on reptilian movements. The fact that Jackie plays a mute character also helps to draw all the focus to his body. Without the use of his voice, he must bring the character to life completely through his face and his body, and he does so admirably. Here Jackie is a silent movie star, amidst the world of a sound film, and it’s great fun.

All that and a truly awesome end fight (and many more throughout the film) makes Shaolin Wooden Men an awesome experience. It’s definitely not on par with Jackie’s later successes, but I think it’s wrong to judge it so. Taken in context, it’s a revelation to Jackie’s career and should have proved to Lo Wei that Jackie was better in films where he could enhance and exhibit what he was best at, instead of trying to pigeonhole him into a standard wuxia role, or as a Bruce Lee clone. I’d recommend Shaolin Wooden Men to open-minded Jackie fans interested in seeing where he started, as it’s the first film of his career that feels connected in some way to the Jackie we all know and love.

Next up in this chronological journey through the films of Jackie Chan: 1977’s To Kill With Intrigue! It’s got a good title, if nothing else, and I can’t remember whether or not I’ve seen it before. So if I have, then I guess that doesn’t bode well for the quality of the film!