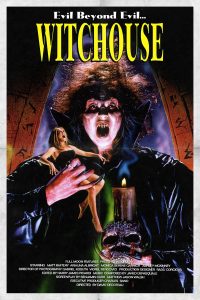 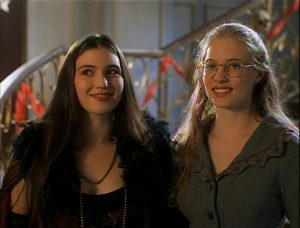 The story is about as average as you can imagine, although I found it to work well enough for the low-budget film it is. While virtually all of the characters are unlikable and annoying, they are also easily distinguishable as unique individuals. I don’t know that this is necessarily something to commend, as it should be the baseline for a good film, but I’ve seen too many bad movies where the characters all run together not to appreciate it. These characters never feel like real people, but they are distinct (often hilariously so). There’s the applied science guy, the witchy host, the stoner, the badass chick who brought her electric guitar (presumably because she’s always ready to rock), etc. The acting bringing these caricatures to life is not great (specifically from Brooke Mueller), but it’s good enough, and honestly it all kind of adds to the movie’s charm.

Witchouse re-uses some footage of the hellscapes from Dark Angel: The Ascent, but it is integrated into the film quite well, adding a visual depth that would’ve never been possible otherwise. The film is by no means a visual feast, though — it is a very low-budget, late ’90s Full Moon film, after all. DeCoteau wrangles as much flavor as he can from the single location, but there are only so many ways to shoot the same rooms over and over. There’s also a fairly strong Night of the Demons vibe to Witchouse, what with the witchy host picking off her guests, but I honestly haven’t seen that one in so long I couldn’t tell you if there’s anything other than a passing resemblance.

What really matters, though, is the entertainment value of a movie like this, and I was thoroughly entertained for the film’s brief 72-minute runtime. I can’t decide if Witchouse is actually good, or if I was just happy to revisit all my favorite Full Moon and DeCoteau tropes after an unplanned year-long break. Someone else must like this movie, though… Full Moon made two sequels! Whatever the case may be, I had a lot of fun with Witchouse, and it reminded me why I started reviewing the Full Moon films in the first place.

Next time I get around to a Full Moon movie, I’ll be checking in with yet another David DeCoteau film: 2009’s The Brotherhood VI: Initiation! It’s the final Brotherhood film, so I’m hoping it finishes the series off on a high note. See ya then!