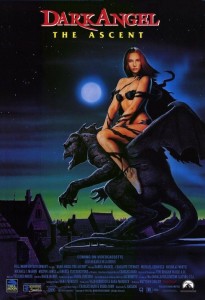 But lo, my fellow parishioners of the B-Movie church, the rest of Dark Angel: The Ascent isn’t awful! It’s actually pretty good! Veronica makes her way to our world, which in the movie is supposed to be a big US city, but is clearly Full Moon’s favorite ’90s destination: Romania. It is here in Ameri-Romania that the premise of Hell’s Angels serving the Lord bears fruit, as Veronica becomes a crusader for justice, killing those that do evil before her. She even sets her sights on a corrupt politician, ala The Dead Zone! These escapades are a bit bloodier than is usual for a Full Moon film, fitting the dark tone of the film well, and only rarely venturing into camp territory. I enjoyed the over-the-top moments, such as when Veronica rips a man’s spine out and offers it up as a token of remembrance to the man’s would-be rape victim, but I’m sure others would roll their eyes. 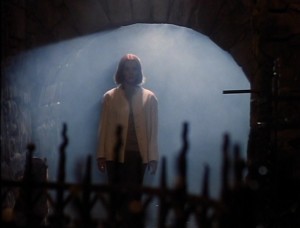 Full Moon’s not known for their production design, as their budgets rarely allowed for the creation of large-scale sets meant to transport the viewer to another land. Which is why I have to single out the work done to create the version of Hell that opens the film. It’s nothing special when compared to big-budget stuff, but within the realm of Full Moon films it looks like they really tried their best to create a fiery, tortuous version of Satan’s domain. It’s amazing what a few fiery braziers lighting up incredible Romanian ruins can do to create an evil, ominous atmosphere! The dudes with cages over their heads didn’t hurt either!

And that’s kinda all I got. If you dig Full Moon’s films, Dark Angel: The Ascent is definitely one to check out. In addition to introducing a great premise to the cliched God v. Satan struggle, it’s also a bit of a darkly erotic love story, a fish-out-of-water comedy (or maybe I wasn’t supposed to belly laugh when Veronica makes skin-tight leather clothes out of a couch), and a slasher movie where you root for the killer. A love of B-Movies is definitely required, but Dark Angel: The Ascent is of a slightly higher quality than many of Full Moon’s other films.

Next time I get around to a Full Moon movie, I’ll be going with the Full Moon-related 1988 film Grotesque! See ya then!