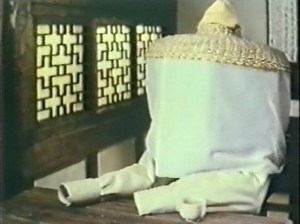 These flashbacks make up a good part of the film’s story, but since that kind of metered character development doesn’t really make for a great action film, they added some villainous intrigue that Yin Chu the Shadow Girl (AKA Silver Maid) gets mixed up in. She is a young, playful girl and when she comes upon a wedding party one day, she can’t resist using her powers to mess with them. Inadvertently, she ruins the planned marriage, so the father of the bride, a respected bandit chief, gets very upset and starts sending out waves of baddies (with names like The Three Wolves & The Four Terrors) to defeat her.

This is all well and good, but it’s not much of a story to hang an entire film on. The film is really poorly paced and just kind of mopes along from one encounter to the next. The fights aren’t anything special either, with merely average choreography and stunts that will do little to excite fans, even fans that take the year of production into consideration. This changes slightly when the bandit chief must resort to calling down the Two Ancients from their mountain hermitage.

The Two Ancients are by far the best characters in the film, and they brighten every scene they’re in. One ancient is blind and carries a long staff, the other is a cripple with no legs. They might not seem like the kind of guys you’d ask to murder an invisible girl, but this is a wuxia film so obviously those old dudes are the most badass guys that the world has ever seen. The blind one has a cat-like sense of hearing, and the crippled hermit is able to fly, control the wind and use some light telekinesis! He’s also got a poisonous centipede ring that he throws, which looks like something out of Evil Dead as it flies towards its target. Together, the Two Ancients are quite the formidable force!

But at the mere mention of the invisible girl, the two old men shake in fear. We are then treated to a flashback from before these ancients were ancient and when they had all their eyes and limbs. This is easily one of the best scenes in the film for me, and will delight fans of the Shaw Brothers style of campy gore. It’s moments like these, where wild fantasy is allowed to run free, that make Shadow Girl an enjoyable experience even though it’s overall a very mediocre film. 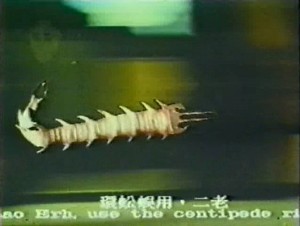 Director San Kei doesn’t shy away from showing Yin Chu’s invisibility either. This adds a considerable amount of campy fun, but the rudimentary green screen technology also means that there’s a difference in the film quality between regular shots and the composited ones. Everything gets yellow and degraded, and the print is already fairly discolored already. I don’t think it detracts from the power of the FX, but I’m sure most people looking at this from at least 40 years after production would disagree. I like to assume they did the best they could, and I honestly don’t think it looks all that bad. I’ve seen worse, let’s just put it that way.

Shadow Girl is another rare Shaw Brothers film unreleased by Celestial during their remastering phase. So the print is full screen with cut-off, burnt-in subs, sourced from what looks like a video master. It’s crazy how much a bad print can affect a film, and at times this one honestly looks like some random yahoo picked up an old VHS camcorder and recreated some Shaw sets in his backyard. I’m sure the film would look a lot more impressive if it were remastered, but at this point I think it’s fair to assume that will never happen. So this is as good as it gets. Which is fine, as long as you don’t let this sort of thing influence your opinion of the film itself (as I sometimes used to in my youth). 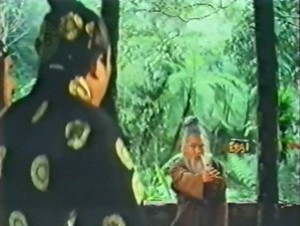 Shadow Girl was Taiwanese filmmaker San Kei’s only film for the Shaw Brothers. It’s unfortunate, as the fantasy stuff here is really well-done and unique, and I’d have loved to see what he could have done with a better script. But even this lackluster script offers its share of wuxia gems, such as the incredible wuxia nickname, Deadly Rainbow, and this fantastically campy line said by one of the bandits to Shadow Girl:

“You wouldn’t go to heaven, so now you’ll go to hell!”

I wouldn’t say that Shadow Girl is really worth hunting down, but completionists and fans of wild fantasy will definitely find something to enjoy here, as I did.

Next up in this chronological jaunt through the Shaw Brothers Martial Arts catalog: the Top 10 List for 1970–1971! After that, I’ll finally be moving into 1972 with Chor Yuen’s The Killer, the first Shaw Brothers film with Yuen Woo-Ping choreography! See ya next week!