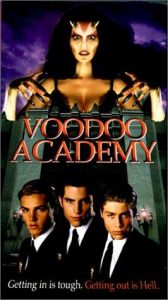 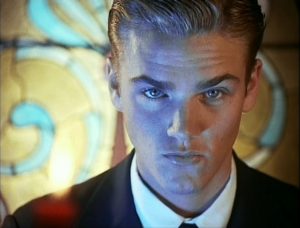 The film’s opening clearly lets us in on the secret that Carmichael Bible College is a much more treacherous place than its pious, stained-glass chapel would suggest. A woman helps a young man slowly disrobe, fondling him all the while. A priest looks on, unbuttoning his own shirt and caressing his bulging pecs and six-pack abs. He’s party to whatever strangeness is afoot, and he’s clearly enjoying himself. Soon the younger man is strapped to a table, and just when he starts to realize that things aren’t going to get sexual for him, the priest pours ceremonial wine over the man’s body. In true DeCoteau fashion, the sound of a heartbeat accompanies the film’s score. This scene is one of the purest and best examples of the DeCoteau charm, and we’re just one scene into the movie! Thankfully, the entire movie continues to deliver, all the way until its inevitable final confrontation.

Voodoo Academy exists in two distinct versions, though. Charles Band was not so hot on all the homoeroticism that the film contained, so after shelving it for roughly a year, he finally released it to VHS after editing out about 23 minutes. The DVD retains DeCoteau’s original edit, and while I haven’t seen the shorter version, it’s hard to imagine this film playing anywhere near as well with any part cut out of it, let alone a full-on 23 minutes. I mean, yes, 23 minutes of chest fondling and studs in bulging boxer briefs is A LOT — and I wonder what the actors felt like performing all of this — but what’s a DeCoteau movie without these things? 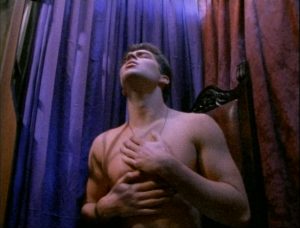 Voodoo Academy has an undeniable erotic flow that shouldn’t be stifled, whether or not you think all the fondling is necessary. It is perfect as it is, and DeCoteau’s passion for the material comes through the screen incredibly strong — especially in comparison to some of this other Full Moon films of this time, most notably the lackluster Totem. I haven’t looked into the specific story, but given the proximity of Voodoo Academy and DeCoteau creating Rapid Heart Pictures, I have to imagine that crafting something personally satisfying, only to see it sit unreleased and then become compromised, must have pushed DeCoteau into creating a company all his own where he would retain creative control. This was a win for both DeCoteau and his fans, so in a weird way it’s a great thing that Band did what he did. Once again, restriction and compromise benefit the artist more than simply getting his way in the first place.

For fans of David DeCoteau, Voodoo Academy is highly recommended, essential viewing. It feels in many ways like a Brotherhood-adjacent film, to the point that I want to call it Voodoo Academy: Young Christians. The key difference is that the secret society exists as an enemy of the group of youths, not composed of the youths themselves. This kind of film definitely isn’t for everyone, but those who enjoy sacrilege and the male form will certainly find a lot to enjoy here.

Next time I get around to a Full Moon movie, I’ll be checking in with the first Moonbeam film, Prehysteria!, recently re-mastered and released to Blu-ray/DVD. See ya then!