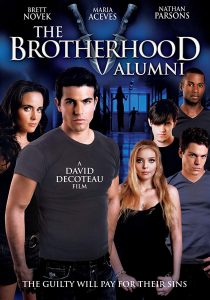 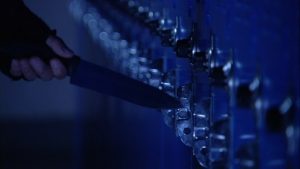 If this premise sounds familiar, it’s because it’s the same set-up used in the classic cult horror films The Redeemer: Son of Satan and Slaughter High (with both films likely drawing inspiration from Agatha Christie’s famous novel And Then There Were None). In a rather fortuitous happening, I recently watched both of these films, so to see the premise arise again offered me a chance to consider the merits of each film. I didn’t particularly care for any of the three films, but each have their strengths. I think I’d pick The Brotherhood over the others if I were going to re-watch only one, which surprises even me. The idea of this story structure in a film with less going on and hardly any blood or FX work, seems like it would spell disaster, but the love I harbor for the distinct style of David DeCoteau apparently does wonders. I’m sure others would choose differently, but The Brotherhood is definitely the one that aligns with my sensibilities the most. 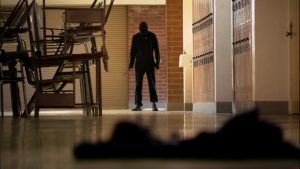 I see all three as ineffective horror movies, but The Brotherhood V: Alumni delivered enough fun along the way that I was ultimately satisfied. Both The Redeemer and Slaughter High take themselves too serious without the filmmaking quality to back it up, so the blue-tinted, softcore style of DeCoteau filled in the gaps for me. I always find DeCoteau’s sexual scenes to be well-shot affairs that also make me laugh quite a bit, and the ones here continue the tradition. I especially enjoyed the double shots of everyone removing their shirts, usually first in a wide shot, and then again in a waist-up medium shot. You really get a chance to study each person’s shirt removal technique, and enjoy or critique as you see fit. There is also more than enough time to study the lost art of kissing while standing up. The Brotherhood V: Alumni is also the first Brotherhood film to feature an actual gay love scene. Since the series is often referred to as homoerotic, I’m surprised it took this long to come up. The oddest, and therefore most entertaining love scene choice, though, was to layer the heartbeat sound effect over the threesome, giving the scene an ominous tone that never failed to amuse me.