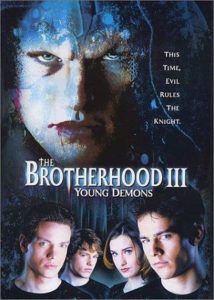 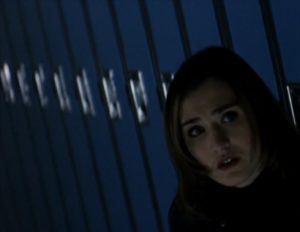 Shakma features the same setup (except for the Egyptian magic part), but instead of a hooded executioner stalking the players it’s a wild baboon who busted loose from his cage. Shakma makes up for its lack of budget with the riveting unpredictability of the baboon. Replacing this dynamic factor with a character that slowly walks around without much menace doesn’t do The Brotherhood III any favors. But this is only something that matters if you’ve seen Shakma, so people who don’t have a familiarity with the premise will enjoy the movie, right?

HAHAHAHAHAHAHAHAHAHAHA… Wrong! Having seen Shakma showed me that this premise had potential, and in turn that made me look forward to what the film might eventually offer. Without this, I can’t imagine the fortitude it would take to withstand the barrage of meaningless walking scenes past the same set of lockers. This is some high-level B-Movie watching in the worst way: it’s the type of film that offers almost nothing in return for your time. 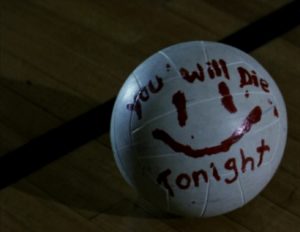 I say “almost nothing” because there are flashes of interest that happen from time to time. The costume of the executioner is nicely done, with an intriguing array of circular medallions and rings adorning his robe that gives you something to look at during his many “walking in slow motion past some lockers” scenes. He also takes his victims by seduction instead of violence, pushing them down to their knees so they may (presumably) fellate him. What exactly happens to the victims remains a mystery for much of the movie, and I will say that this ends up loading a good amount of interesting stuff into the final 20 minutes or so. The film ends on a high note, but it is a relative high that could epitomize the “too little, too late” phrase.

DeCoteau’s trademark underwear scenes aren’t as prominent in The Brotherhood III: Young Demons, but there is one major shower scene that I guess makes up for the rest of the movie. I don’t know how many dudes shower with their underwear on, but based on this guy’s success maybe I’ve been doing it wrong this whole time. My favorite moment of the movie comes during this scene, as well. As the muscled guy washes his toned body, the executioner comes to pay him a visit. When he reaches the shower, the executioner does not do what you’d expect him to do, though. Instead, he stands at the shower entrance, holding his knife in the air while he watches the guy bathe himself. He stands there for a good amount of time, allowing us to enjoy the moment along with him. It’s a riot.

The Brotherhood III: Young Demons is a huge step down from the fun of the first two Brotherhood films. Unlike the previous films that showcase a brotherhood indoctrinating new members, this film tries to show the creation of a new brotherhood. The only problem is that there’s next to nothing here, and if I wasn’t reviewing the movie I can’t imagine actually sitting through the whole thing. Enter at your own risk… this one is even a stretch for fans of DeCoteau!

Next time I get around to a Full Moon movie I’ll be jumping into another Ted Nicolaou Moonbeam flick: Leapin’ Leprechauns! See ya then!