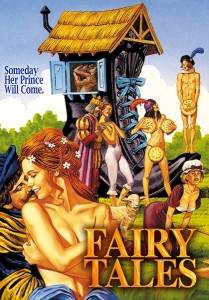 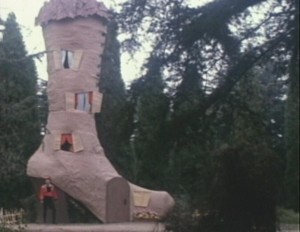 But back to the movie (and not the movies in my head), the Prince has one major problem: he can’t seem to get excited for anyone but the girl painted on his wall. She is the long-lost Princess Beauty, who was last seen many years ago in the land of Fairy Tales. But with the deadline looming, the Prince sets off on a valiant quest to find the princess and bring her back so that they can get fruitful and multiply.

As you can surely imagine, this is not a movie you come to for big, smart ideas. It’s dumb, its humor is completely in the gutter and a strange feeling of perversion creeps over you as you watch the naked characters cavorting around with one another. Cinderella is a very similar film in terms of songs and construction, but I felt far less dirty watching that film. Without much of a story driving Fairy Tales forward, we really are supposed to be watching just for the nudity. Or the songs, I suppose, although they’re nothing to write home about (and if you’re contemplating writing home about a softcore musical from the ’70s, you’ve got issues that I’m not qualified to discuss). 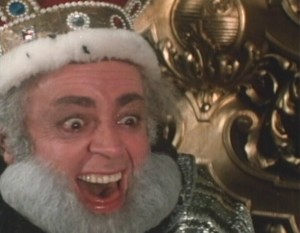 While I didn’t find this one all that funny, I did find enjoyment in the strangest of places: sound design. Most of the film takes place in and around the nursery rhyme shoe that the old woman lived in, except now the old woman is Gussie Gander, a madam running a brothel out of the place. She employs a fast-talking doorman who dresses in black leotards and a red ringmaster’s jacket, and he gets many scenes to rattle off jokes to the curious men looking for a good time. It’s amusing on its own, but it’s the stock jungle sounds on the soundtrack that really got to me. You haven’t lived till you’ve heard bad sex puns and innuendo delivered while jungle birds and chimpanzee hoot away in the background.

Fairy Tales is ultimately just a series of mostly unrelated vignettes of classic fairy tales with nudity, all tied together via the brothel. It’s the world’s oldest profession both in real life and in our fairy tales. The film never promises anything more than it delivers, although after Cinderella I was hoping for something a little more cohesive and funny than this. It seems to take some inspiration from The Who’s Tommy as well, with scenes of Cyrus (Sy Richardson) taking the Prince around to be fixed by various prostitutes and a voodoo practitioner that reminds hard of The Acid Queen. It does offer some strange delights, though, such as Snow White singing about her “seven itty bitties, no taller than her titties.” And even if it doesn’t have anything as hilarious and outlandish as Cinderella’s snapping pussy, there is the Frog Prince. He’s surprisingly human… until the camera pans down to his ribbiting crotch!

Recommended if you liked Cinderella, but just don’t expect something as good.

This trailer is definitely NSFW, y’all!

Next time on Full Moon Tuesday, I’ll be checking out Auditions, a companion film to Fairy Tales in that it is supposedly composed of the auditions held for the film’s never-produced sequel! See ya then!